A DIVE IN THE PREHISTORY OF THE DOLOMITES

Not far from the marvelous San Lorenzo church in the center of Selva di Cadore lies the brand-new Public Museum of the Fiorentina Valley dedicated to the memory of the great expert of local history, discoverer and experienced mountain explorer Vittorino Cazzetta (1947 – 1997); it is an interesting exhibition space managed by the volunteers of the Amici del Museo Association that disclose to the public three interesting sections dedicated to the History, Geology and Archaeology of the Val Fiorentina and of the Dolomites UNESCO World Natural Heritage Site. The Vittorino Cazzetta Public Museum of the Fiorentina Valley is one of the most important and significant museums of the Dolomites and a visit to the museum of Selva di Cadore can be a splendid occasion for the whole family to learn something more about this place and about the whole dolomitic area.

The museum is housed inside a recently built building not far from the center of Selva di Cadore, the church and the Pro Loco Tourist Information Office; the Public Museum of the Fiorentina Valley offers a wide collection of unique and valuable finds and documents (for more information visit the page dedicated to the Museum), but the most important find is certainly the skeleton of the “Om de Mondeval” (the “Man from Mondeval”), that is the remains of a hunter-gatherer from the Mesolithic dated 7500 years ago and discovered accidentally by the aforementioned Vittorino Cazzetta in Mondeval de Sora (a beautiful plateau right above Selva di Cadore under the Croda da Lago mountain range in the Municipality of Borca di Cadore) in 1985; Vittorino was nearby a huge stone in Mondeval de Sora as he noticed the presence of strange objects in the ground moved by a groundhog: looking more closely, he understood that they were arrowheads of worked flint. He started to dig into the ground until he made an extraordinary discovery: right at the foot of the rock there was a tomb with a prehistoric man with his grave goods. Vittorino contacted immediately some experts: this important find was followed by 15 archaeological excavations leaded by Professor Antonio Guerreschi of the Ferrara University that allowed the scholar to unearth the intact remains in excellent conditions of a 40-years-old hunter-gatherer of the Mesolithic Era buried with his grave goods composed of three long flint swords (that weren’t used, so maybe used for the funeral), several drilled tooth that probably were part of a necklace, two bone knives, three groups (probably three small sacks) of flint, a harpoon, a bone tip (probably a needle), a bow drill and other lumps of food and other substances. 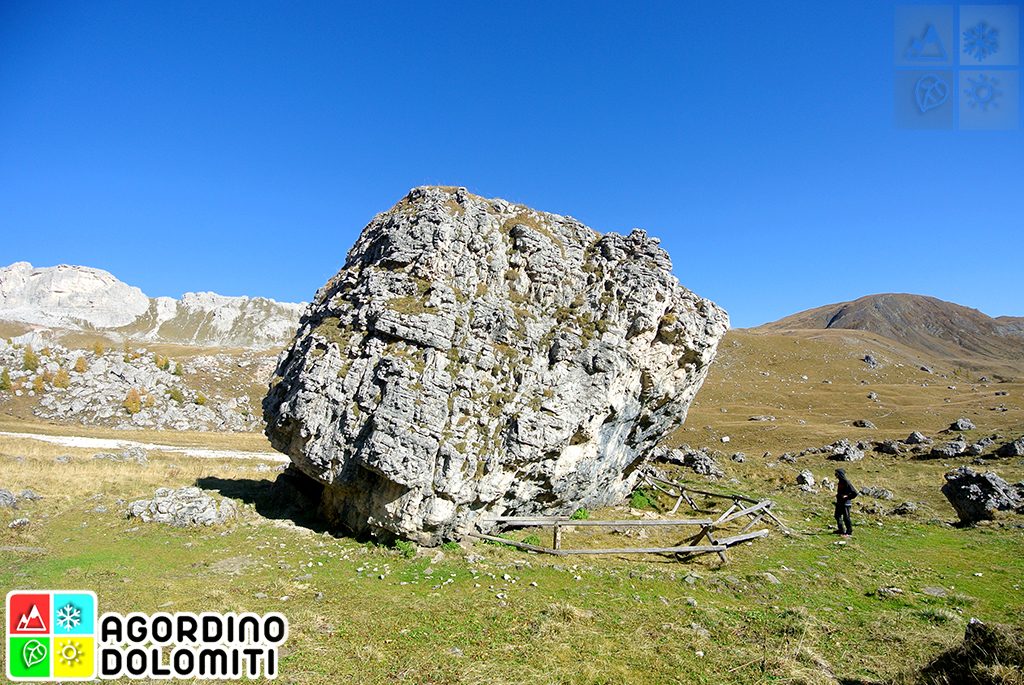 The discovery of the burial place of the Man from Mondeval had (and still has) a huge scientific meaning: until that time indeed scientists believed that the Dolomites had been just a place of passage for men until the first millennium A.D.: the discovery of the hunter-gatherer of Mondeval revealed on the other hand that the plateau was inhabited permanently in the sixth millennium B.C., as testified by the body of the hunter-gatherer, by his personal objects and by the presence of a tomb (which suggests the existence of funeral rites) in Mondeval de Sora.

Vittorino Cazzetta was not only the first discoverer of the remains of the “Om de Mondeval”, but also the one of the Neolithic Site of Mandriz in the Loschiesuoi Valley, where he found a vase of this period; this site has given us many important pieces of that remote era (like arrowheads, flint stone tools, food wastes) that suggest us a certain degree of human presence. Furthermore, Cazzetta noticed the well-known dinosaur footprints on Mt. Pelmetto whose mold is now located in the Val Fiorentian Museum dedicated to him; he died in 1996 in mysterious circumstances on Mt. Piz del Corvo, and some people talk about a sort of course of the Man of Mondeval.

If you’re spending an holiday in the Dolomites UNESCO World Natural Heritage Site and if you’re looking for something cultural to do with your family, don’t forget to visit the “Vittorino Cazzetta” Public Museum of the Fiorentina Valley and to admire the Man from Mondeval – It’s worth it!

Click here to visit the page dedicated to the museum