Father Antonio Della Lucia (1824 – 1906) is one of the most famous Agordino personalities at national level; he was born in Frassenè Agordino (in the Municipality of Voltago Agordino) in the hamlet of Vich in 1824; Father Antonio’s family was numerous and of a humble social background (most of the family members were field laborers), a situation which was very common in the Agordino area in the period. From an early age, Father Antonio showed great attraction for religion and the desire to enter a seminary, but his religious career was impeded by his humble social status. Since the young man was very smart and promising, his fellow citizens decided to give him a chance: thanks to a collection made by the families of Frassenè Agordino, Father Antonio was finally able to enter the seminary in the city of Venice and then in Belluno and to become a priest in 1849. It is nice to think that the generosity of the people of Frassenè which allowed him to study was the starting point of Father Antonio’s career as a great philanthropist and unselfish man.

His first assignment as a priest was to flank Father Martino Ghetta, the old preacher of the community of San Tomaso Agordino; in 1856, Antonio replaced the previous pastor and led the community of the High Agordino for four years; the experience as a priest with Father Martino Ghetta was, as evidenced by the biographies, uplifting, and allowed Antonio to get in touch with the world of charity and aid to his community members. In 1860, Father Antonio Della Lucia was transferred to Canale d’Agordo, of which he remained the priest for more than 40 years.

Father Antonio Della Lucia cared not only for the spiritual aspect of his community: he was a fierce Italian patriot, enough to antagonize the Austrian police which considered him a troublemaker: in this period indeed, the Veneto Region was not yet part of the Reign of Italy and it was controlled by the Austrians. To escape the pressures of the Austrian authorities, Father Antonio moved to Tuscany and returned to the Agordino only after the annexation of the Veneto to the Reigno of Italy.

The deeds and works for which Father Antonio Della Lucia can be considered a witty, brillian man began in 1868 with the foundation of the first rural kindergarten in Canale d’Agordo, the first one in the Province of Belluno: it was a kidergarten for the children up to 8 years old of his community. Then he created the first mobile library in Canale d’Agordo, then also in Caviola (Falcade) and Vallada Agordina in order to promote reading and the consequent improvement of living conditions in his community.

But there’s more: Father Antonio spreaded the ideal of cooperativism among the workers of his community with the aim to improve working conditions and wealth for everybody; this idea consisted in the concept according to which “unity is strength“, a principle which belonged to socialism but that was applicable in a certain Christian way to the community. By forming a consortium with many little farmers and dairy workers it could have been possible to reduce the expenses, increase the production and improve the freight distribution system; if before the idea of Father Antonio, every songle farmer had to care about the stall, produce his own dairy products and sell his own products (in a market that was anyway narrow and poor), Father Antonio’s system optimized the whole production and distribution systems for the benefit of each individual producer.

To reach this goal, Father Antonio Della Lucia founded the first consumer cooperative in Caviola in 1871 and the first mutual aid society in Carfon (Canale d’Agordo); to overcome the distrust of the peasants of the Biois Valley, which at first didn’t want to abandon the traditional methods to join a cooperative system of which they didn’t understood the benefits, Father Antonio turned himself into a cheese-maker to be an example to all: he bought milk from local producers, then produced cheese in the parish permises and sold them. Following his great success, the priest convinced the greatest part of the farmers of the Biois Valley to join his cooperative, the first Dairy Cooperative in Italy (8th January 1872).

The news was widely covered in newspapers; the Ministry of Agriculture praised the idea and started promoting it in the whole peninsula. Father Antonio Della Lucia was appointed Knight of the Kingdom of Italy by king Vittorio Emanuele II in 1878, while dairy cooperatives spread like wildfire throughout Italy and farmers gathered with satisfaction the first results of the new production system. Father Antonio committed himself to the realization of a Federation of the Agordino Dairy Cooperatives that was created in 1888; in 1894 he was appointed counselor of the Ministry of Agriculture.

The Federation of the Agordino Dairy Cooperatives was awarded two times on the occasion of the National Exposition in Palermo in 1895 and thanks to this it could start to distribute its products all over Italy: the production was expanded and a seat for the federation was founded in Agordo, in the building where nowadays resides the Comunità Montana Agordina.

Father Antonio Della Lucia retired to private life in 1989 in Caviola (Falcade) and died in 1906 at the age of 82, leaving a great heritage for the Agordino people behind him. 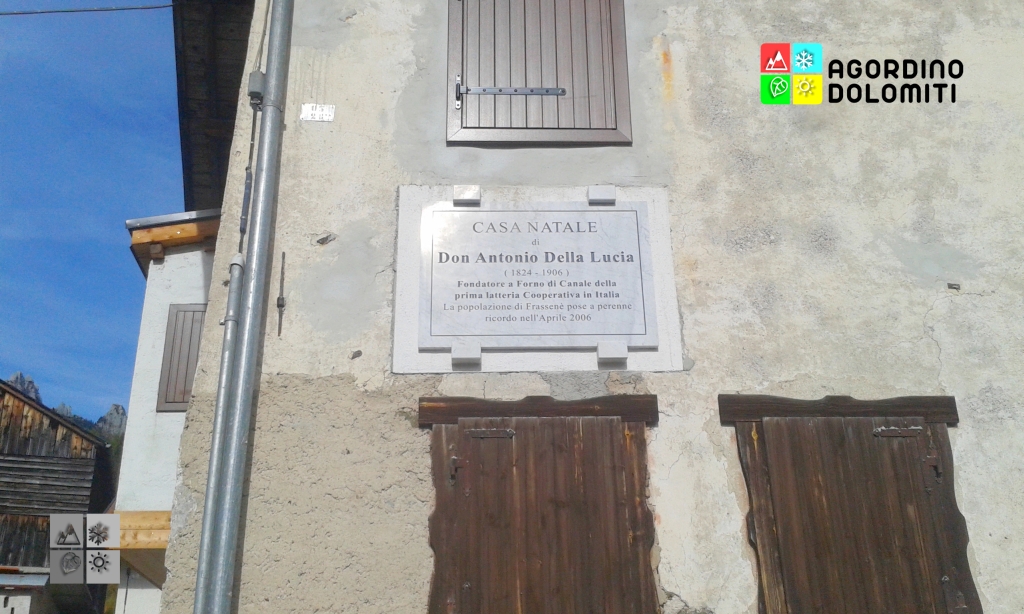 Commemorative plaque on the birthplace of Father Antonio in Frassenè Agordino