In the past centuries, the only sure source of income for the Agordino people was, unfortunately, mining (in Val Imperina or in Vallalta), a job that we know to be greately ungrateful; barely without union representation and with few rights, miners were confined in the bowels of the earth or in the unbearable spaces of the melting furnaces; they were exposed to unpleasant temperatures, workplace accidents and perhalps to the fumes of many different melting products or tunnel powders. Wage was very poor and terrible, tracherous and painful diseases such as silicosis were very common among miners. Furthermore, the heavy labor and the poor diet certainly did not ensure a long life expectancy. If to all these factors we add the lack of work in some periods (dued to floods, tunnel collapses, management changes), it’s easy to understand that the situation was very precarious and that people were forced to sharpen their wits.

Probably the need to find an alternative to the arduous work in the mines or to increase somehow the meager income promoted from the 16th Century the development in the lower part of the Agordino area (and more specifically in the Municipalities of the Conca Agordina) of a particular manufacturing sector: chair construction and caning. The Agordino chair maker (also known with the typical denomination of “conthe” or “careghete“) came mainly from the Municipality of Rivamonte Agordino and Gosaldo (but also from Agordo, Voltago Agordino, La Valle Agordina, Taibon Agordino, Cencenighe Agordino); they dealt with the chair making and chair caning seasonally or during the whole year by moving to other Italian cities or to France and Switzerland. Those who did not practice this profession yearly usually worked in the Agordino mines for a few months or devoted themselves to agriculture before resuming the chair making profession. Children were usually involved early in this profession not so much because they were useful at work but rather not to be a burden for the family that remained at home while the householder was absent. The profession of the “contha” became even more popular in the end of the 19th Century, that is when the workplaces as miners became to be insufficient and being a contha became a necessity and not an alternative.

The chair maker wasn’t definitely an easy job, although preferable to the mine: the “careghete” were forced to move from a city to the next one on foot or by bicycle and transporting exclusively their tools (that were produced only in Agordino) and a few personal effects; this life style clashed with comfort, and the Agordino chair makers were obliged to reduce the weight of the transported objects, so that even clothes were reduced to essentials. Food and overnight were even more uncertain: chair making was difficult, although the Agordino chair makers were treated with respect and kindness from the citiziens of the French and Swiss cities in which they worked. The manufacturing process of chairs wasn’t a simple matter: it required first of all the appropriate tools which came from the homeland and which were thus difficult to find abroad; then a chair maker needed different types of wood in order to build the different parts of the chair. Finally, a great ability was needed: the entire chair structure had to be assembled with minimal use of nails (which at that time were a luxury item). Each contha was jealous of his own art: he usually travelled with a couple of children entrusted to him by families of his villagers for they to learn the secrets of chair manufacturing from their early age. Of course, the little apprentices didn’t receive a salary and they had to renounce to leisure activities for the whole season; in return, however, they learned a job that in the future would enable them to feed themselves.

To prevent their secrets to be snatched by others (or on other occasions in which they needed not to be understood – remeber that until 1870 the Agordino was occupied by the Austrian-Hungarian Empire), the Agordino conthe used a special language of their own invention and that only a contha could know: it is the “scapelament dei conthe“, a coded language which was traditionally invented by the artisans of Tiser (Municipality of Gosaldo) and widespread on the whole Conca Agordina; the “scapelament” was absolutely incomprehensible for those who didn’t know the secret language. The “scapelament dei conthe” threatened for a long time to disappear but in recent times it was the object of the attention of many willing scholars that have worked to save it from oblivion by transcribing in a number of publications and even in some dictionaries.

Even if nowadays chair making is a job which has amost disappeared due to the industrial development of the last two centuries, chair making tradition in the Conca Agordina has still survived thanks to the work of several associations and clubs; a lot of young people choose every year to attend to the courses organized by the local associations, and in Gosaldo there’s even a museum which is completely dedicated to the chair makers from the Agordino. 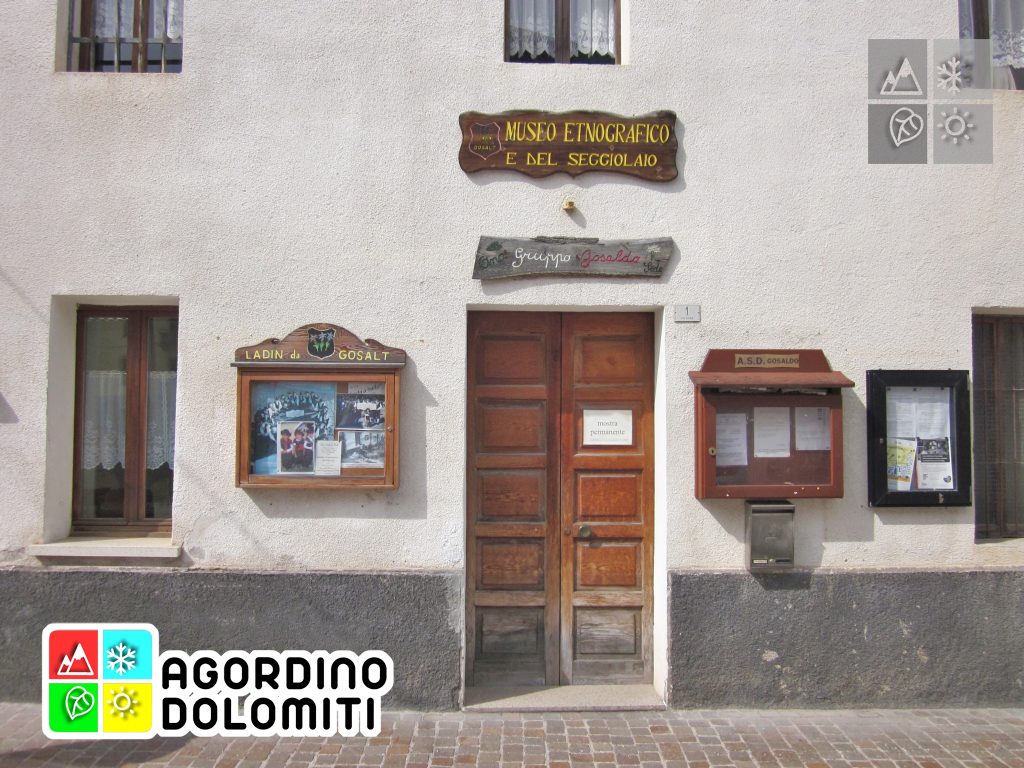