Included in the first of the 9 officially recognized and protected UNESCO Dolomites System (according to the classification of the UNESCO Dolomites Foundation), that is indeed the Pelmo – Croda da Lago System, Mount Pelmo (3186 meters of altitude) is undoubtedly one of the easiest recognizable and most beloved peaks of the Dolomites UNESCO World Natural Heritage Site.

Majestic and imposing, regardless on wich side you look at it, the Pelmo is able to fascinate and attract the attention of the observer with all the beauty and unique features of the Dolomites. According to the SOIUSA International Classification of the Alps, the Pelmo belongs to the Pelmo Group and to the Northern Zoldo Dolomites Supergroup, whereas the contiguous Croda da Lago is part of the Croda da Lago – Cernera Group in the Ampezzano Dolomites Supergroup. 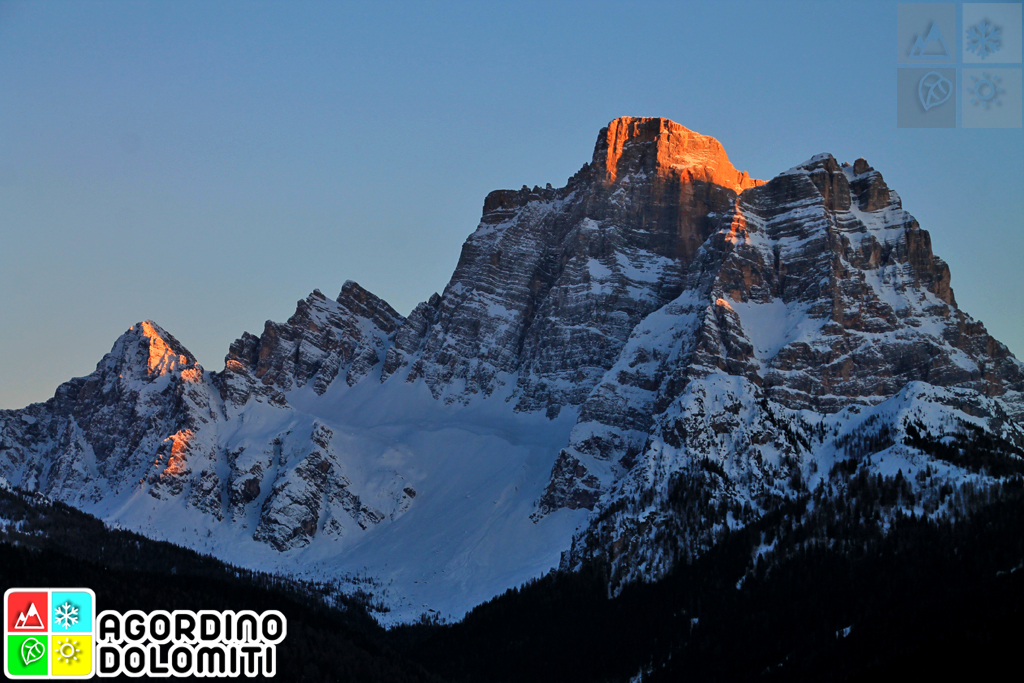 Located entirley in the territory of the Province of Belluno, between the Agordino, della Val di Zoldo, del Cadore and Cortina d’Ampezzo areas, Mount Pelmo is one of the best known proponent of the Dolomiti Bellunesi. Known in the different Belluno dialects as Pelf, Pelego o semplicemente Pelmo (the most common name in the Agordino area), Mount Pelmo is also known as “Caregòn del Padreterno“, which means “God’s Throne“, because of its very particular form, compact and solid. This is a quite unique case in the Dolomites group, mountains which are usually very jagged and eroded by climate agents (and usually widely-spreaded); with its solid shape, the Pelmo rises, monolithic and majestic, as one of the main characters of the Dolomitic landscape.

The real Mount Pelmo is complemented by Mount Pelmetto, another peak of the same group that reaches the remarkable altitude of 2990 meters; Pelmo and Pelmetto are separated by a mountain pass called Fessura (or Fisura in Zoldano dialect). In addition to these two peaks, the Pelmo Group expands towards the Cadore area with two minor extensions, the Crode di Forca Rossa and the Cime di Val d’Arcia). The God’s Throne has been taken as a symbol both for the Val Fiorentina and for the contiguous Val di Zoldo; in both valleys, the different faces of Mount Pelmo are able to arouse strong emotions, above all at sunset, when the particular dyes of the enrosadira color with fiery hues the massif

Not surprisingly, Mount Pelmo was among the first peaks of the Dolomites to be conquered by the first mountaineers and explorers of the Alps back in the 18th Century; the first ascent to the summit of Mount Pelmo is due to the Irish naturalist and mountaineer John Ball (1818 – 1889), that went up to the top of the Pelmo because he was immediately attracted by its shape when he first arrived in the Dolomites. Ball, accompanied by a local guide, conquered Mount Pelmo in the Summer of 1857 through a passage that is known since then as Cengia di Ball. The explorer, that was a naturalist also, L’alpinista, che era anche naturalista e scienziato, spent many beautiful words to describe the uniqueness of the Dolomites, emphasizing the grandeur, the unnatural fragmentation and the geological difference that make the Pale Mountains unique.

Nel XX Secolo, il Mount Pelmo was the setting of many spectacular mountaineering undertakings, above which we mention here the “direttissima sud-ovest” in 1977 by the Italian climbers Bee, Miotto and Groaz. Climbing routes on Mount Pelmo are quite challenging and demanding, and addressed exclusively to experienced rock climbers.

Nowadays, the most popular ascent way to the Pelmo is the so-called Via Normale that passes through the above mentioned Cengia di Ball; it’s anyway a hard route that requires excellent levels of physical preparation as well as a very good knowledge of the Alpine environment; those who like to face this or other climbing routes on Mount Pelmo can turn anytime to one of the efficient Mountain Guides of the area.

Enthusiasts of hiking in the Dolomites appreciate Pelmo for its dense net of walking trails; the ring excursion that surrounds the massif is the setting of the famous fell running race Transpelmo; but there are a huge variety of hiking paths located at the base of the peak. Convenient excursion approach points to the massif are, for instance, Passo Staulanza (from the base as well as from the top of the pass) and Palafavera and Coi in Val di Zoldo.

Of a huge historical interest is the ascent to the Mondeval Plateau from the hamlet of Toffol in the Municipality of Selva di Cadore; this hike allows guests to reach the Mandriz archaeolofical site as well as the burial place of the Om de Mondeval, both finds of the Selva explorer Vittorino Cazzetta. For further information about these hike, please fell free to read our dedicated article here.

The discovery of the remains of the Om de Mondeval (or Valmo, as he was recently renamed) is a fact of a huge historical importance which testifies how the Dolomties and particularly the foot of Mount Pelmo was inhabited by men since the Neolithic Age (the estimated date of the body of the Mondeval hunter-gatherer is 5500 BC.). And, to be honest, looking the landscape around from Mondeval, it’s easy to feel a kind of empathy with our ancestor for their choice of living in such a marvellous, albeit not very comfortable, place. The boby of Valmo and his grave goods, recovered by the experts of the University of Padua, together with other very interesting archaeological finds and geological attractions are kept in the beautiful Museo Civico della Val Fiorentina in Selva di Cadore, a museum that is defintely worth a visit if you’re around.

Ascenging to the Pelmo from Palafavera or Selva di Cadore, another beloved attraction of Mount Pelmo are the 200 dinosaur footprints present on the famour rock right below the Pelmetto, which were also discovered by Vittorino Cazzetta. A cast of the rock is also housed at the above mentioned Museo Civico della Val Fiorentina “Vittorino Cazzetta” in Selva di Cadore.

Mount Pelmo is the main character of the Agordino stages of the Alta Via delle Dolomiti n. 1 Braies – Belluno and it’s surrounded by three Rifugios that are also excellent and cozy bases for hikers: Rifugio Passo Staulanza, on the namesake mountain pass; Rifugio Venezia (the closest to the l’Alta Via) and Rifugio Città di Fiume in Selva di Cadore. Hiking trails are generally very well equipped with hiking signs, easily accessible and highly used by hikers. 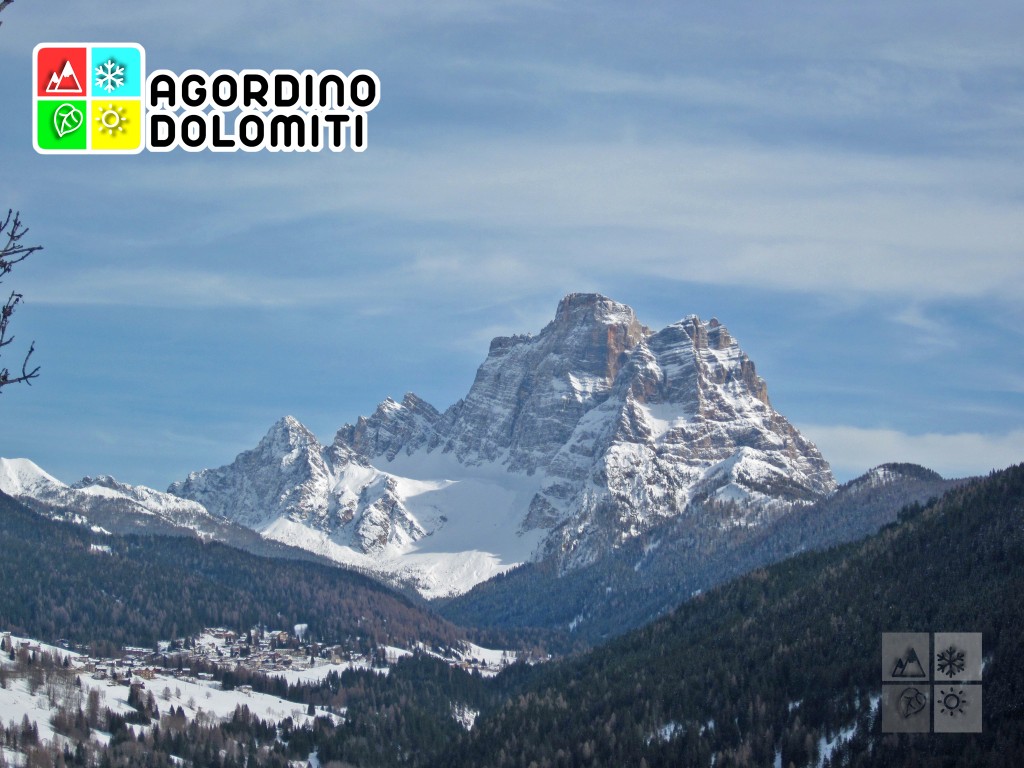 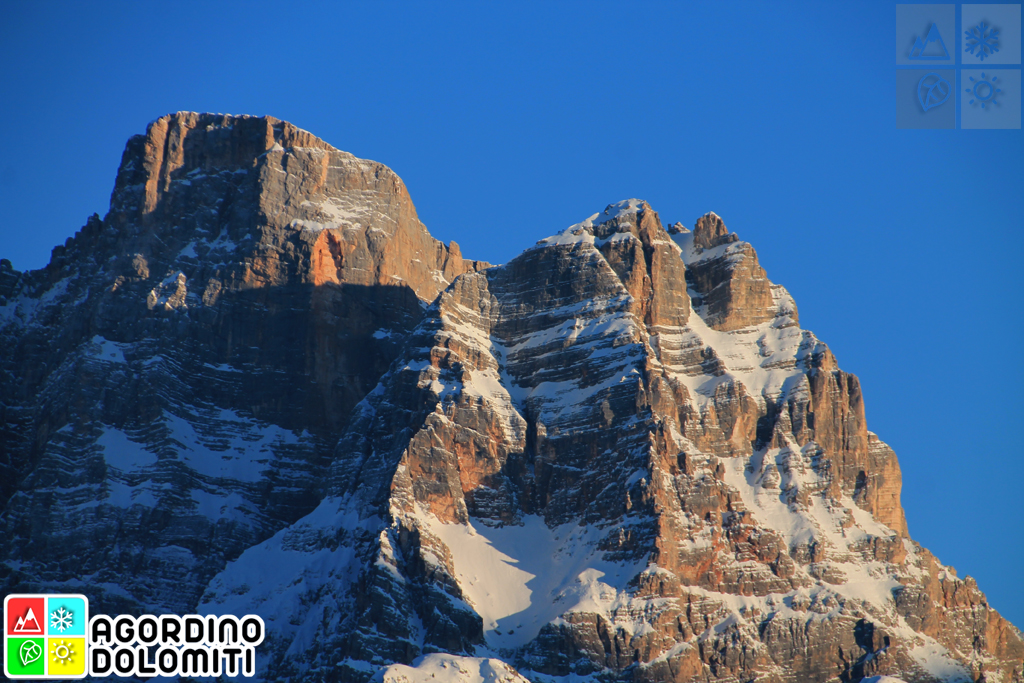