In the presence of the Queen of the Dolomites

Mount Marmolada (sometimes written “Marmolata” in English and German) with its 3343 meters of altitude is the highest peak of the Dolomites UNESCO World Natural Heritage Site; for its unique features, which we will discuss in this section, the Marmolada bears the nickname of “Queen of the Dolomites” (a name given to this mountain by the English writer Rachel Heriette Busk in 1874).

Mount Marmolada is a peak of the Eastern Alps located in Italy; institutionally, this mountain and the peaks of its mountain ranges are located on the boundary between the Agordino area (Province of Belluno, Veneto Region) and Val di Fassa (Province of Trento, Trentino – Südtirol Region). The road connection between these two valleys is Passo Fedaia, a renowned mountain pass of the Dolomites that winds spectacularly at the foot of the Marmolada massif.

Concerning tourism, there are two main tourist resorts at the foot of Mount Marmolada: Rocca Pietore (in the Val Pettorina, Agordino area) and Canazei (in Val di Fassa, Trentino). The peaks of the Marmolada group find themselves in the territory of many other famous villages of the Dolomites: Livinallongo and Arabba, Falcade, Moena, etc.

The name “Marmolada” has an uncertain etymology but it seems to derive from Latin or from an ancient local variation of Latin. The name could mean “the shiny mountain“.

In addition to Mount Marmolada itself, the Marmolada Group is made of a series of impressive peaks located both in the Province of Belluno and in Trentino. The above mentioned SOIUSA Classification divides these mountains in seven subgroups:

In the Agordino area, the peaks of the Queen of the Dolomites can be admired at best from the Val Pettorina, the Valle di Fodom, the Val Biois; Mount Marmolada and its subgroups can be admired however from anywhere in Agordino, including Conca Agordina, Val del Mis and Val Fiorentina. 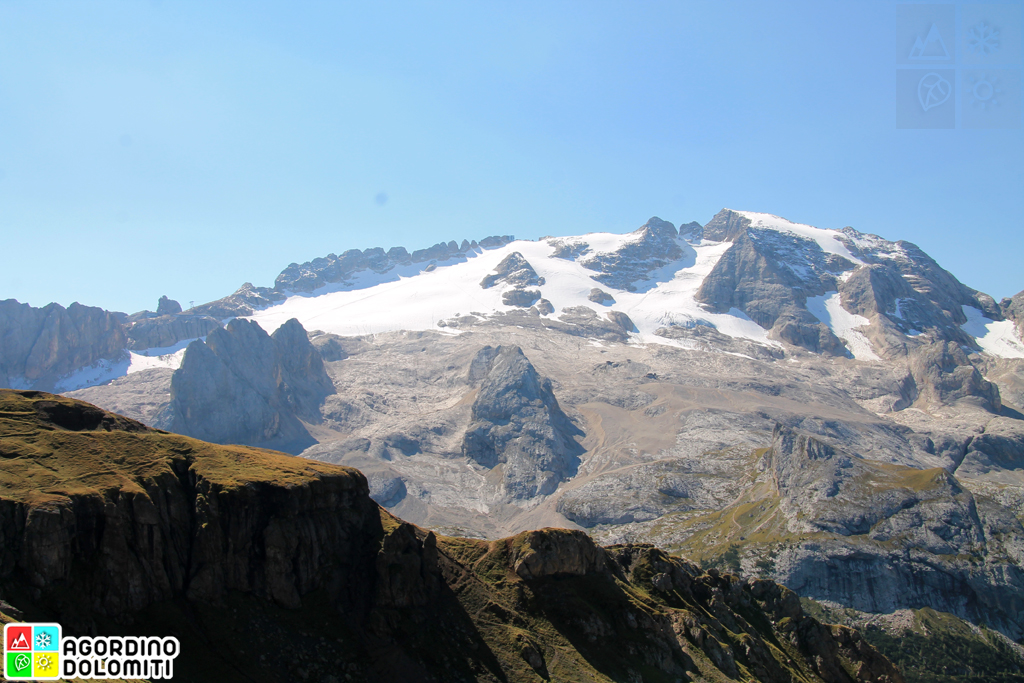 If you want to read more about the subgroups of the Marmolada, click on the entries below:

Mount Marmolada is since the beginning of the mountaineering exploration of the Dolomites (to read more about this, feel free to visit our section “The Discovery of the Dolomites“) the most sought-after mountain of the Dolomites area, and it keeps on representing a prestigious mountain environment of the Eastern Alps for all the enthusiasts of mountaineering. The famous English writer Amelia B. Edwards wrote her feelings when she first saw Mount Marmolada in her book “Untrodden Peaks and Unfrequented Valleys” (1872)

“And from there, by rare good fortune, we do see it–a huge, roof-shaped mass, sloping, and smooth, and snowy white against a leaden sky. For the vastness of expression and extent of snow, as seen from this side, it recalls Mont Blanc. Distance, instead of diminishing its bulk, seems by contrast with surrounding heights, to enhance it. The two valleys of Andraz and Livinallungo, the Monte Padon and a whole sea of minor peaks occupy the intervening space; and yet the Marmolata seems to fill the scene.”

The first ascents to Punta Penia, the highest of the Marmolada Massif’s peaks, and to Punta Rocca, the second highest mountain top, is dated 1864 by the Austrian mountaineer Paul Grohmann, whereas concerning rock climbing the first climbing route was discovered by the Agordino mountaineer Cesare Tomè and later, in 1901, by the mountaineers Bettega, Zagonel and Tomasson.

About the climbing exploration of Mount Marmolada the market offers a huge variety of books and interesting videos; those who are interested in this topic can easily find further information. Here we just cite the southern wall of the Marmolada, called the “Silver Wall”, as the climax of the technical climbing difficulty available in the Dolomites; renowned is the hard climbing route known as “Attraverso il Pesce”.

There are some interesting via ferratas on Marmolada and on the surrounding peaks: the Ferrata delle Trincee on the Padon mountain chain is undoubtedly the most famous, but also the Via Ferrata Eterna and the Paolin-Piccolin on the Auta chain are very popular and beloved among the enthusiasts of this kind of sporting activity. There’s also a very nice Via Ferrata for beginners on the Sass de Rocia in Laste (Rocca Pietore) that allows guests to climb one of the impressive Laste Monoliths (the Sass de Rocia indeed).

Mount Marmolada is one of the few peaks of the Dolomites to still have a glacier, and it is the widest of the Dolomitic area. The Marmolada Glacier has suffered since decades of global warming and we’re currently losing entire meters of perennial ice each year, even if this natural attraction, indicator of the world’s overall health condition, is protected both from the Trentino and the Belluno Provinces. Not many years ago, skiing freely on the whole glacier was promoted as one of the key features of the Marmolada ski area; nowadays, luckily, the glacier is treated like a vital resource and constantly monitored by specialists.

During the Great War (fought in the Dolomites from May 1915 to November 1917, when Caporetto moved the war front miles to the south, the Marmolada Glacier was the famous setting of the Eisstadt (“City of Ice”), a complex system of tunnels and chambers, posts and warehouses realized by the Austrian-HUngarian Army by digging in the ice. Global warming has cancelled since a long time every trace of this incredible historical treasures, but the memory still survives in pictures and projects and, of course, in the marvellous Marmolada Great War Museum 3000 M, a wonderful and brand-new museum located at the intermediate station of Punta Serauta on the Marmolada cable car, and included into the price of the regular cable car ticket. This is the museum located at the highest altitude in Europe, and it goes without saying it is a must-see of the Dolomites area.

The Great War was indeed bloody and fiercely fought on both sides; at a first stage, battles were concentrated in the valley floor and on Col di Lana (that will become soon the “Mountain of Blood”); then after the April 1916, when the Col di Lana was blown up by the Italian Army, the war was moved on the Marmolada Glacier, with hard consequences on both sides. It has been said that most of the fallen and missing soldiers, both on the Italian and the Austrian-Hungaruan side, died because of hunger, low temperatures, avalanches and thunders. Guests can learn a lot about the Great War in the Dolomites by visiting the above mentioned Marmolada Great War Museum 3000M at the intermediate station of the Marmolada cable car.

A popular Dolomitic legend tells the story of the birth of the Marmolada Glacier. Long time ago, where nowadays the glacier rises, there were green meadows and the inhabitants of the nearby valleys used them for glazing and haymaking. An old lady was haymaking in disregard of the Our Lady of the Snows day (August, 5th); this day is still considered a very important religious festivity in the Dolomites, and in the past it prescribed rest and prayer. Despite the severe reprimands of her fellow countrymen, she kept making her work. The legend says that, to punish her arrogance, it suddenly started snowing for several days, heavily and without interruption; the old lady, her shelter and all the grassland of the Marmolada were covered by snow that eventually turned into ice: it was the birth of the Marmolada Glacier.