In the Heart of the Dolomiti Superski

*may be subjected to restrictions due to the Covid emergency

The Arabba – Marmolada ski area is one of the 12 ski areas of the worldwide famous Dolomiti Superski, the Italian transregional macroconsortium that gathers nearly all the ski lifts of the Dolomites area.

Well-known for some of the prominent features of the Dolomitic area, Arabba – Marmolada combines the Marmolada ski slope to the Arabba ones and thus to the famous Sellaronda or Four Passes Ski Tour.

The Marmolada Massif, together with the imposing Sella Massif, are the peaks protagonists of the landscape in this wonderful and modern ski area of the Dolomites. Thanks to the central position in the context of the Dolomites, this ski area results particularly striking and panoramic, allowing guests to enjoy a unique overview on the whole Dolomitic area and beyond. As for the position of this ski area within the Agordino territory, the Arabba-Marmolada area is located in the northern part of the Unione Montana Agordina, straddling between the Val Pettorina and the Valle di Fodom.

Arabba – Marmolada is a name that well embodies all the Dolomites’ grandeur: this area allows guests to ski on the highest peak of the Dolomites, that is the Marmolada, the Queen of the Dolomites, and to enjoy the most charming landscape of the place, thank to the amazing Punta Rocca Panoramic Terrace (3256 metri above sea level), the highest view point reachable with a ski lift in the Dolomites. The Punta Rocca terrace is located at the mountain station of the Marmolada Cable Car (the skilift whose valley station lies in Malga Ciapela, hamlet of the Agordino Municipality of Rocca Pietore Rocca Pietore) and is accessible for free to all the customers of the ski lift company. A remarkable event not to be missed is the Dusk on the Queen, an experience organized by Funvie Marmolada Spa that allows guests (both skiers and non-skiers) to enjoy the sunrise from the Punta Rocca Panoramic Terrace before the official scheduled opening time of the ski lifts (more info about the event can be found here).

From Punta Rocca, skiers enter the longest ski slope of the Dolomiti Superski, that is the famous “La Bellunese“. With its 12 kilometers of thrilling descent, the La Bellunese ski slope offers to guests of the ski area unforgettable views on the Dolomitic area and peaks so close that seems one can touch them.  The La Bellunese is definitely a must-do for all the enthusiasts of Alpine skiing and an experience one should make at least once in life.

But there’s more. Thanks to the connection offered by the Passo Padon ski lifts, the Arabba – Marmolada ski area is enriched with the ski slopes of the nearby Arabba ski resort (Municipality of Livinallongo del Col di Lana). Considering the whole skiable offer, Arabba Marmolada offers a total of 76 high-quality ski pistes, always perfectly groomed as imposed by the strict regulations of the Dolomiti Superski. Arabba Marmolada boasts a total of 28 modern ski lifts.

On the Valle di Fodom side, the Fodoma ski slope in Arabba is a wonderful proposal for expert skiers: this unbelievable, steep ski piste is able to satisfy the most ardent fans of alpine skiing thanks to its remarkable features.

Arabba Marmolada and its Ski Tours

The top of the Dolomiti Superski

In addition to the remarkable ski offer represented by the Marmolada ski piste and the nearby Arabba ski resort, the Arabba Marmolada ski area is directly connected to the Sellaronda (or Four Passes Ski Slopes), the most famous ski tour of the Dolomites.

Arabba is indeed one of the 4 valley stations of the Sellaronda or Four Passes Ski Tour, probably the best known winter attraction of the Dolomiti Superski. 500 kilometers of ski pistes (let’s say “virtually” available, since in a normal ski day skiers can only tour the Sella Massif and don’t have enough time to explore other places) are distributed between Arabba, Val di Fassa, Val Badia and Val Gardena and are enhanced by prestigious rifugios, refined high-altitude restaurants, marvelous Dolomitic landscapes and big sporting events.

In addition to the Sellaronda, Arabba – Marmolada is interested by another ski tour of the Dolomiti Superski, that is the Great War Ski Tour (Giro Sciistico della Grande Guerra 1915-18 or Gebirgsjägerskitour 1915-18). This second offer, enriched by historical and cultural attractions connected to the Great War in the Dolomites, connects the slopes of Arabba Marmolada to the nearby ski areas of Ski Civetta, Alta Badina and Val di Fassa.

Both above mentioned ski tours are accessible with the purchase of a single ski pass, that is the Dolomiti Superski daily pass, without the need of buying a ski pass for each valley lift company.

The Arabba-Marmolada ski area boasts a total of 40 ski slopes, divided in blue (easy), red (average) and black (difficult). It this list, as said, there are the black slope par excellence, the “La Fodoma” and the longest ski piste of the Dolomites, the “La Bellunese” on Mount Marmolada.  Although it is a challenging ski area, Arabba Marmolada offers also some training areas for beginners and excellent Ski Schools, so that also beginners can find something amusing to do on skis.

In Arabba guests can find also the amusing Arabba Funslope, a small but fun snowpark located in the Bec de Roces area, accessible also to kids and always perfectly prepared. The Arabba Funslope is equipped with several obstacles (generally easy) and suitable for all kind of skiers and snowboarders. 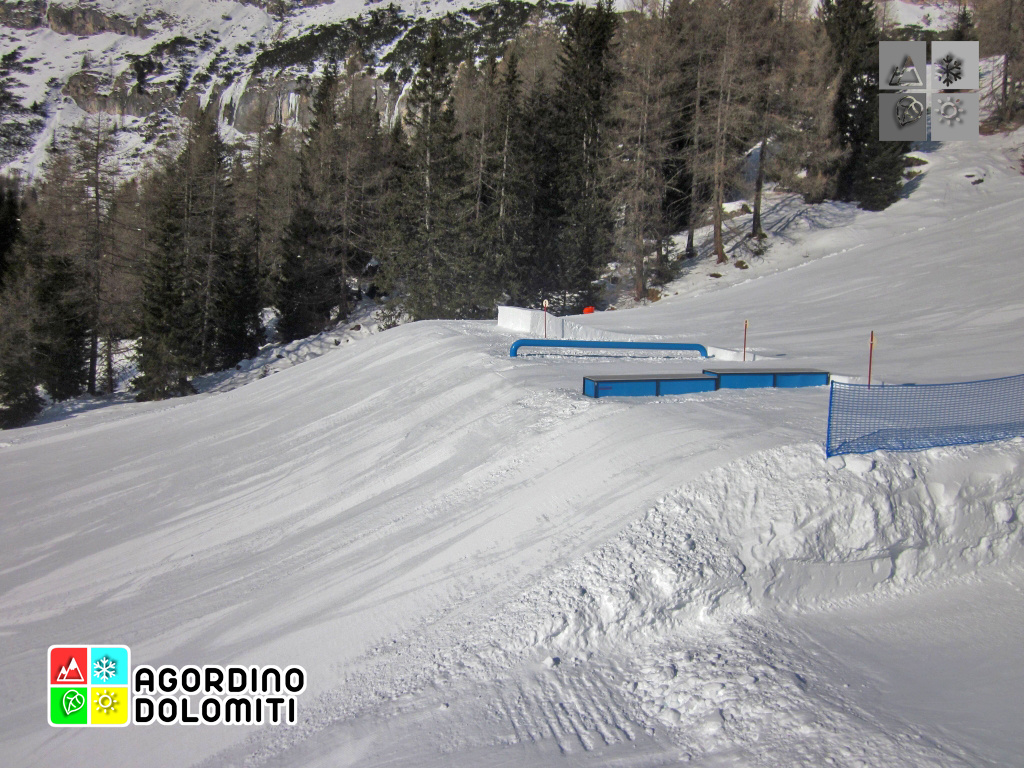 The vast majority of the lifts that make up the Arabba Marmolada Ski Area are also open in summer, as part of the offer known as Dolomiti Super Summer. Both hikers and mountain bikers will find on site dedicated services and the possibility to use the lifts also during the summer vacations in the Dolomites. Summer openings normally run from the end of June to the end of September; more information is available from the ski area contacts (below). 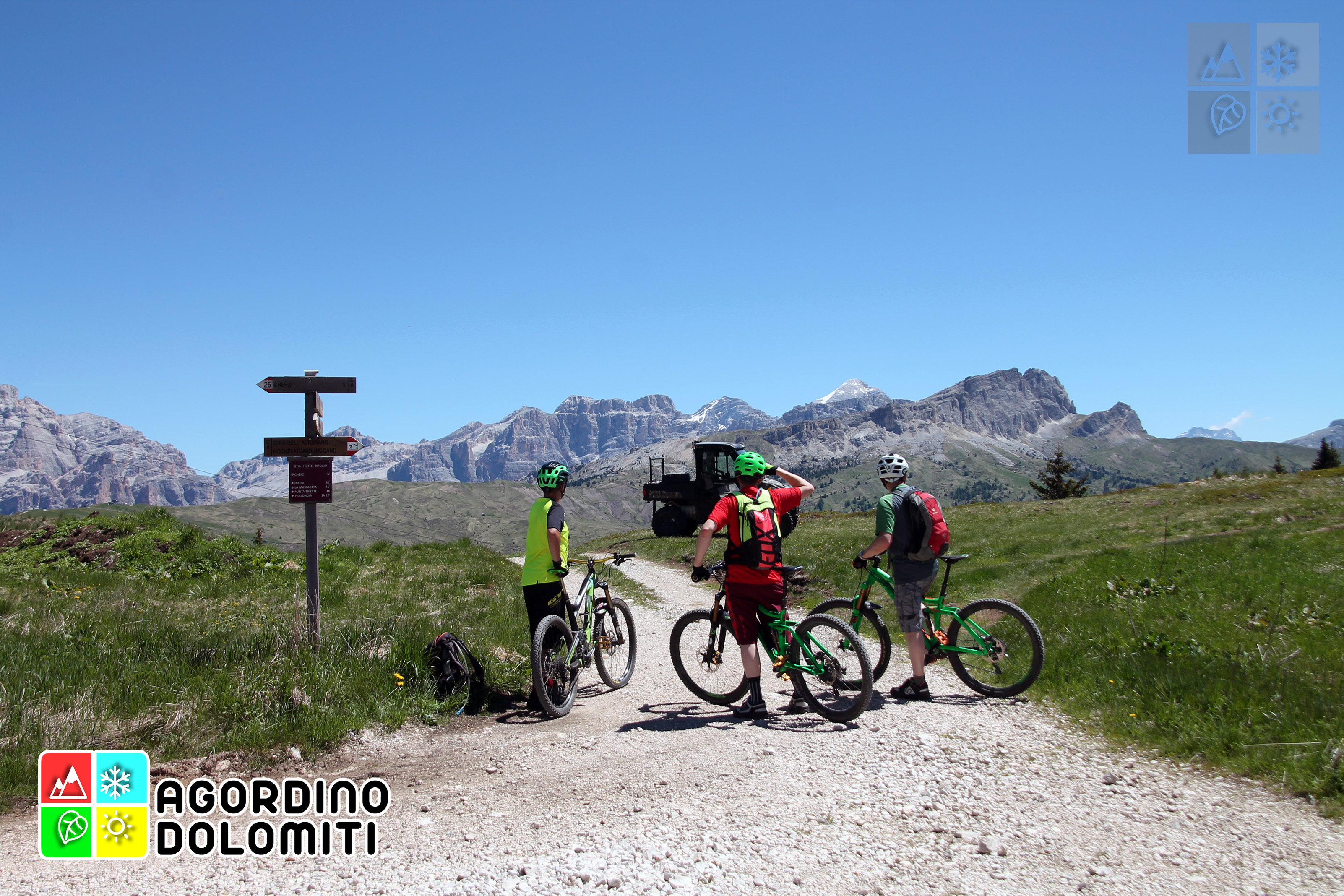 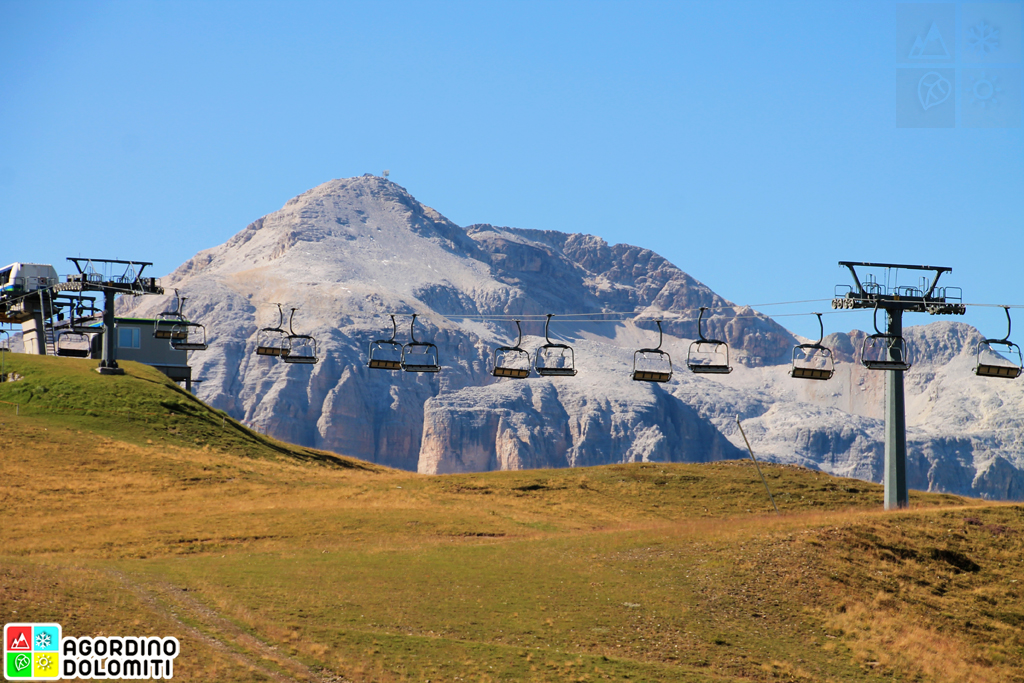 Being located along the infamous Yellow Line, that was the war front between the Reign of Italy and the coalition of Austian-Hungarian and German Empires during WW1,  the Arabba Marmolada Ski Area offers remarkable reminiscences of this sad chapter of human history and a series of dedicated cultural attractions. At the intermediate station of the Marmolada Cable Car, guests of the Dolomiti Superski can enter for free the Marmolada Great War Museum 3000M. This amazing museum is entirely dedicated to the fiercly battles fought on the Marmolada and on the nearby peaks and it is full of extraordinary war finds and valuable digital materials. The Marmolada Great War Museum 3000M is furthermore the museum located at the highest altiutude in Europe.

The Padon Range that lies between the Val Pettorina and Valle di Fodom is another place in which several Great War finds can be admired. Trenches, galleries, tunnels, forts are still there since the Great War. Two attractions connected to the Great War in the Dolomites are the famous Ferrata delle Trincee and the above mentioned Arabba Geological Trail. Other remarkable Great War monuments and attractions can be visited a few meters far from the slopes (more infos can be found in our section Historical Attractions in Agordino).

In Summer, this area is a popular destination both for hikers and mountain bikers, in addition to climbers, sporting guests and so on. Two beloved proposals are the Sentiero Viel dal Pan, in addition to the Arabba Geological Trail. 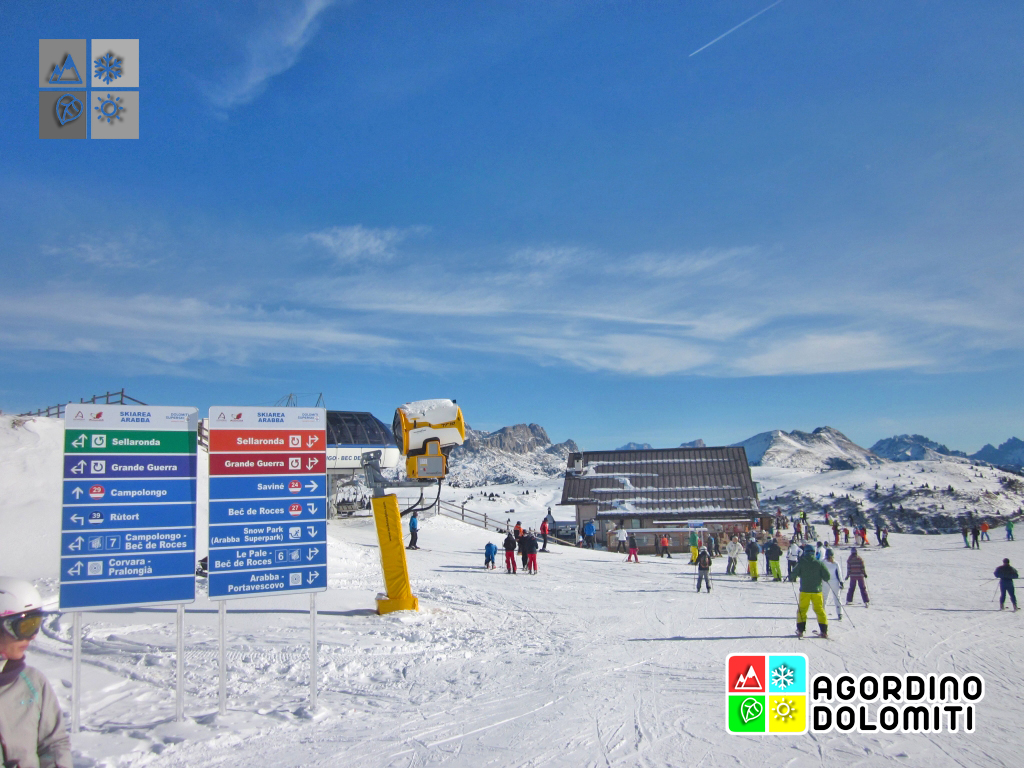 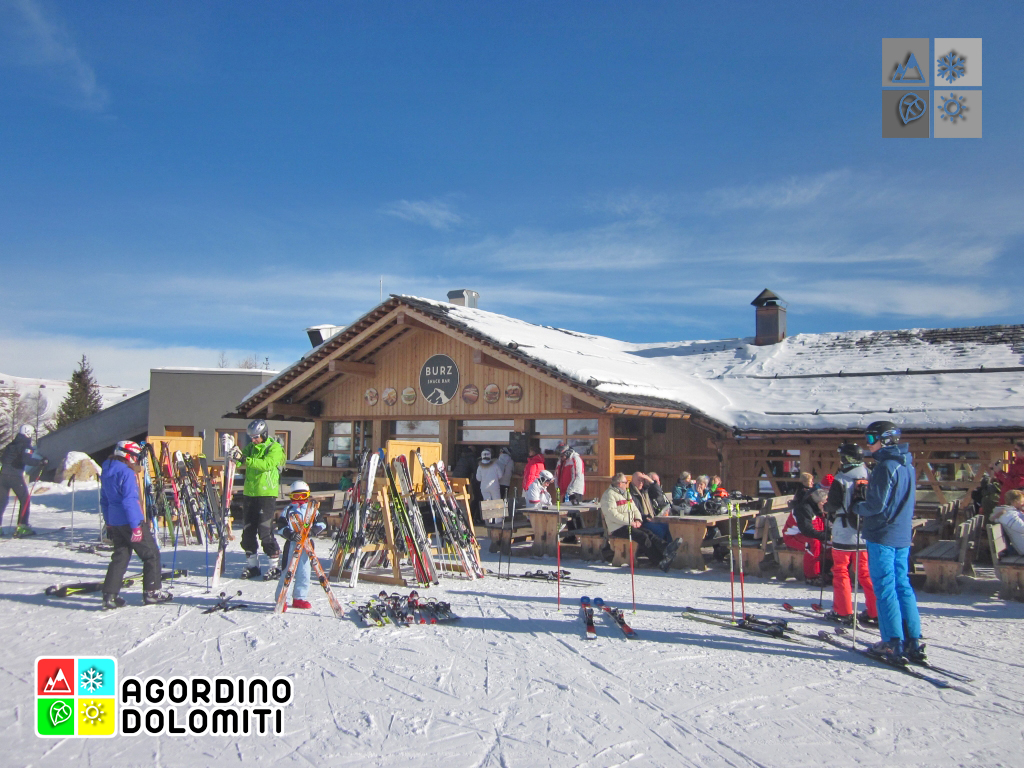 Go to: Alpine Skiing in Agordino