Hidden pearl of the Pale Mountains

Voltago Agordino is a charming mountain village of the Dolomites UNESCO World Natural Heritage Site located in the Conca Agordina not far from Agordo, in the Italian Province of Belluno, Veneto Region. The village, which is sunny and panoramic, is located at the foot of the impressive Mount Agner (in the Pala Group) and it is made up of two main villages: Voltago (Oltàch in the local Agordino dialect) and Frassené (Farsenéch in the local Agordino dialect).

Voltago is one of the most ancient dwelling places of the Agordino area, as testified by the historical documents of the Belluno curia. The center of Voltago rises on a charming and sunny plateau pleasantly surrounded by many peaks of the third of the 9 official Dolomites systems accorging to the UNESCO (Pale di San Martino, San Lucano, Vette Feltrine and Dolomiti Bellunesi).

A famous English noblewoman and writer, Amelia B. Edwards, had the chance to visit Voltago Agordino in the 19th Century and wrote down her experience in her popular book “Untrodden Peaks and Unfrequentedy Valleys” (1872). Ms Edwards was enchanted by the beauty of this village, that she defined “the Cherry Tree Village”. This nice definition is still used in Voltago to descrive this charming place. 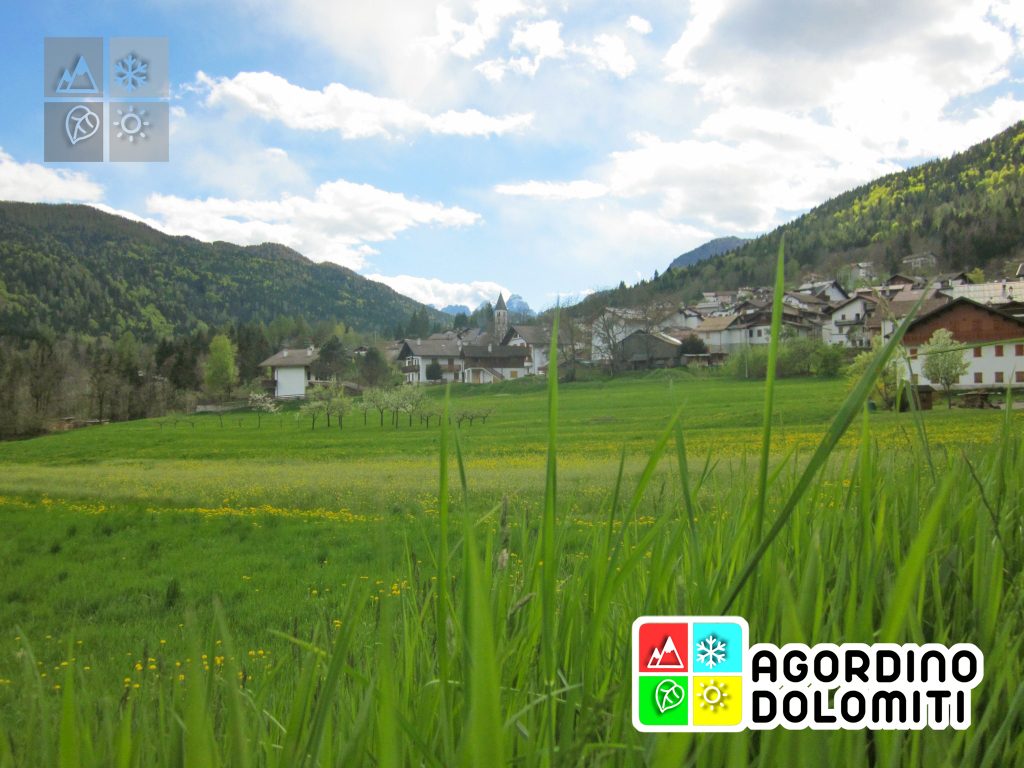 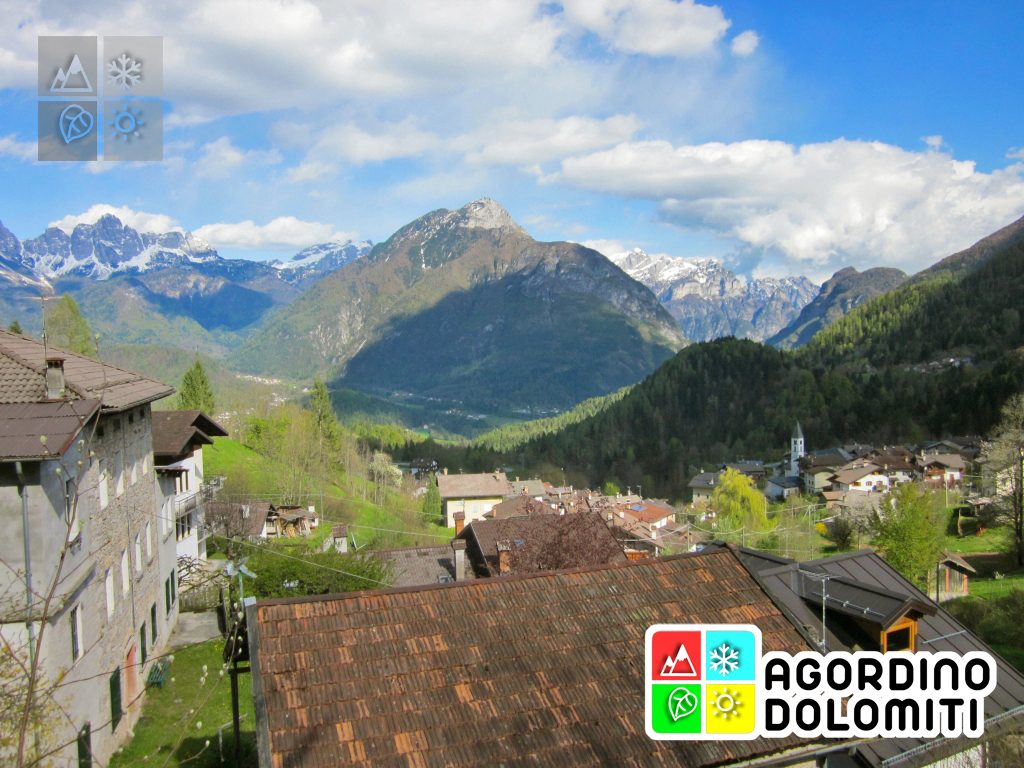 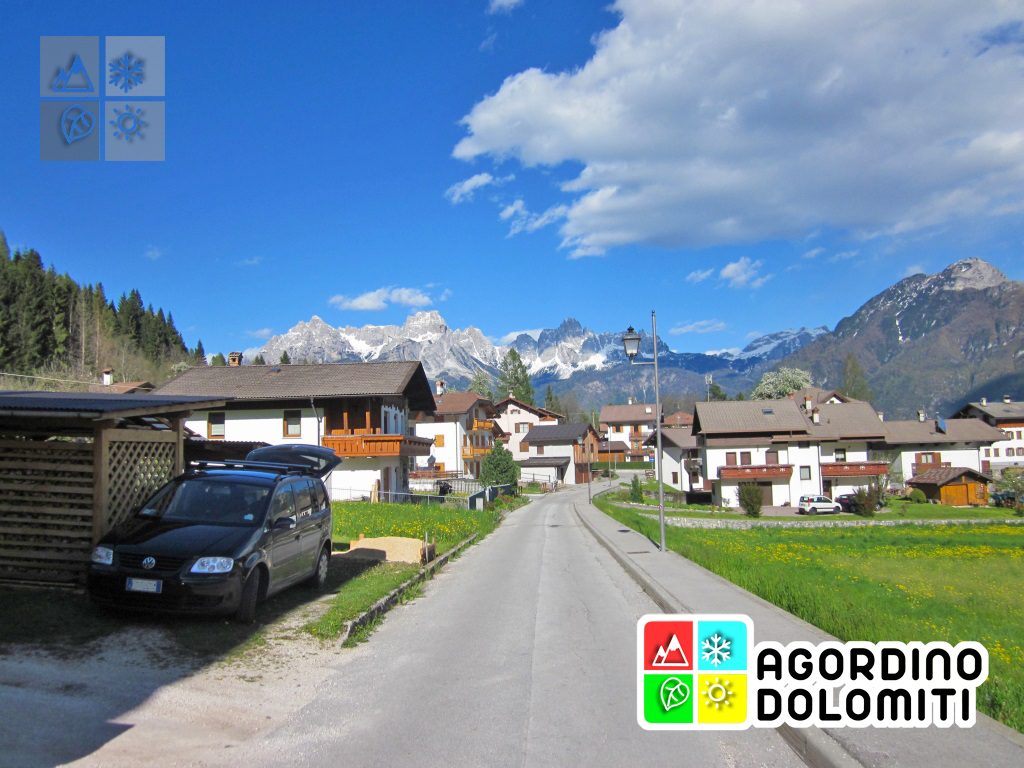 Voltago Agordino came to the forefront of the National press in the 1930s for an emblematic case regarding the supposed apparition of the Madonna. Vergin Mary allegedly appeared to a group of young shepherds in 1937, alike the other famous cases of Fatima and Lourdes. The validity of the apparition was eventually denied by the Roman Church, but pilgrims continued to visit the place for many decades after the time of the fact. The so-called Sass de la Madonna in Piandison is still nowadays a popular tourist destination of the village, both for religious guests as for the ones that are just curious to see it. 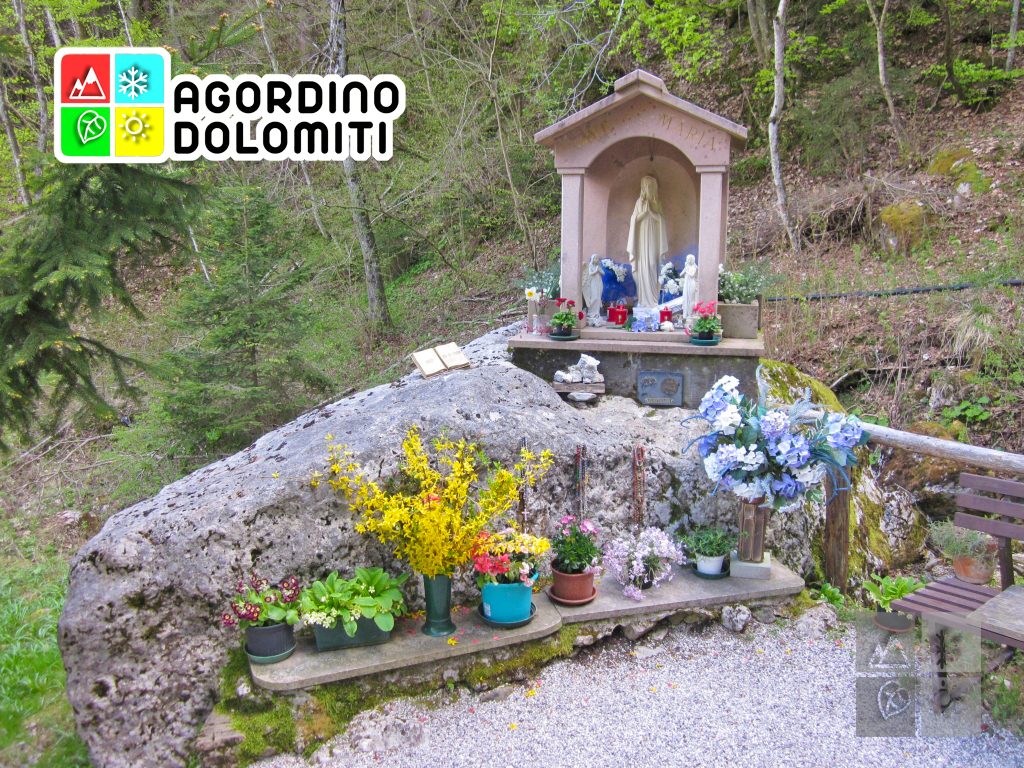 The Church of Saints Vittore and Corona

The village center houses the ancient Vittore e Corona Church, one of the oldest places of worship of the Province of Belluno. The Voltago Church, built up in the Dolomites’ typical Alpine Gothic style, rises in a wonderful panoramic position surrounded by some of the most famous peaks of the area, like the Pale di San Martino, Moiazza – Civetta and many others.

Durante la Seconda Guerra Mondiale, il 12 Ottobre 1944, Voltago Agordino subì una violenta rappresaglia da parte delle divisioni naziste delle SS del reparto altoatesino “Bozen”, la Nearby the church lies the monument dedicated to the victims of the Nazi retaliation of October, 12 1944. The troups of the SS division “Bozen” (the same one that devastated the nearby Val Biois), looking for partisans, executed some people near the church; only the mediation skills of the Voltago priest prevented the execution from becoming a mass slaughter. 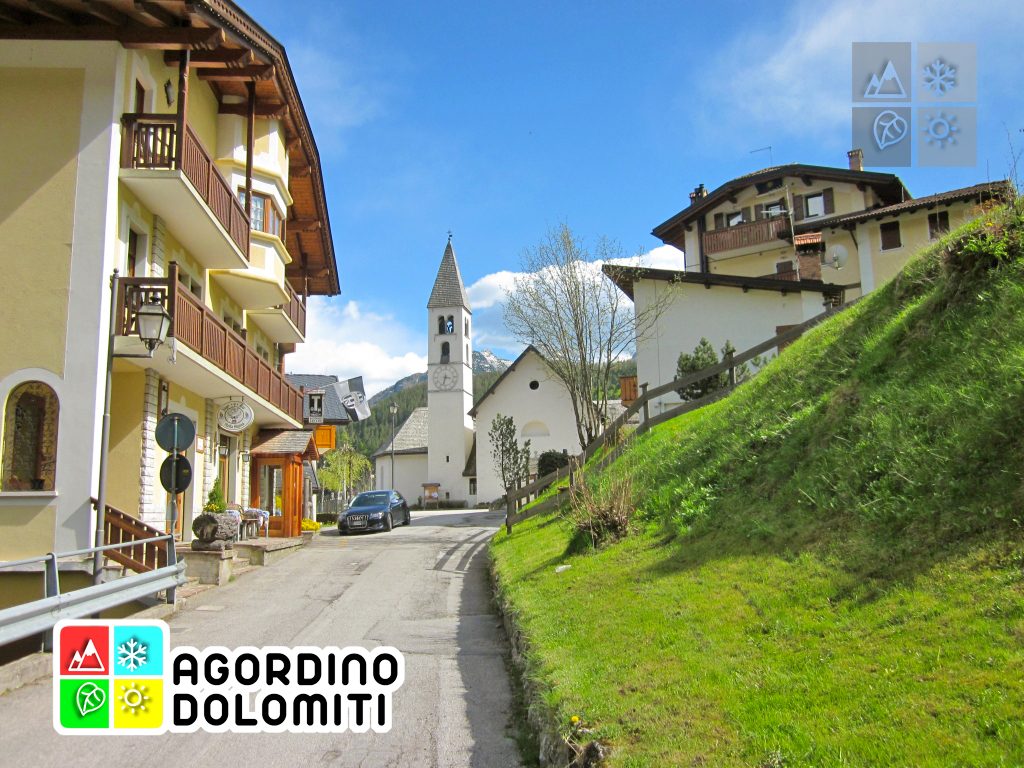 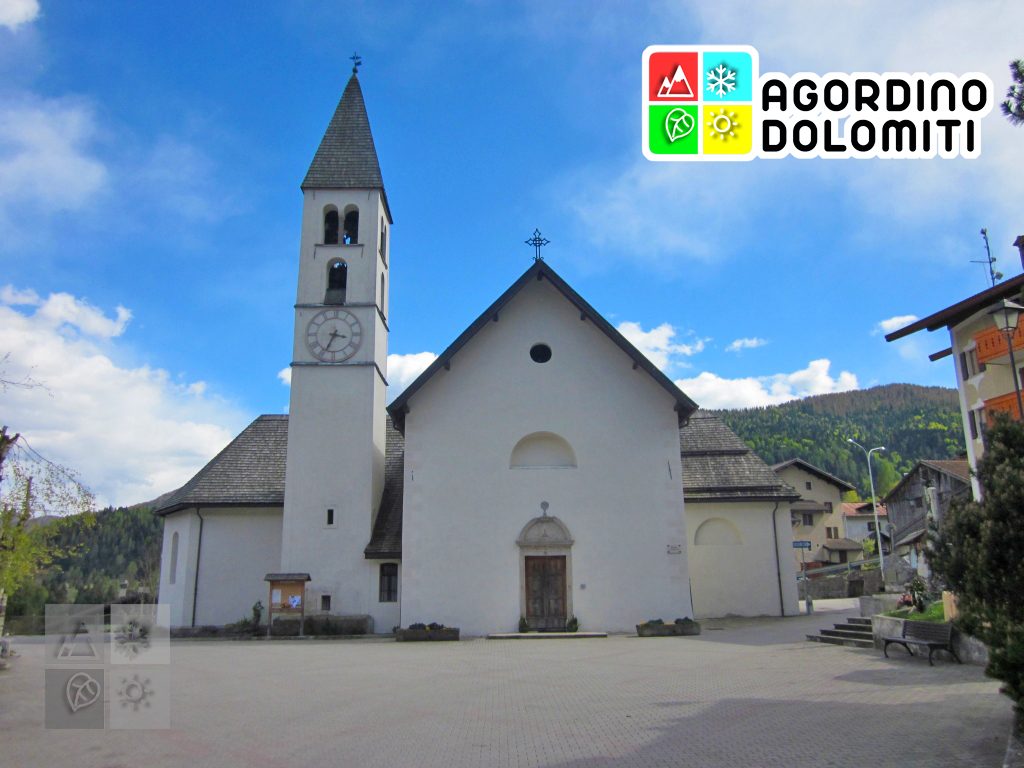 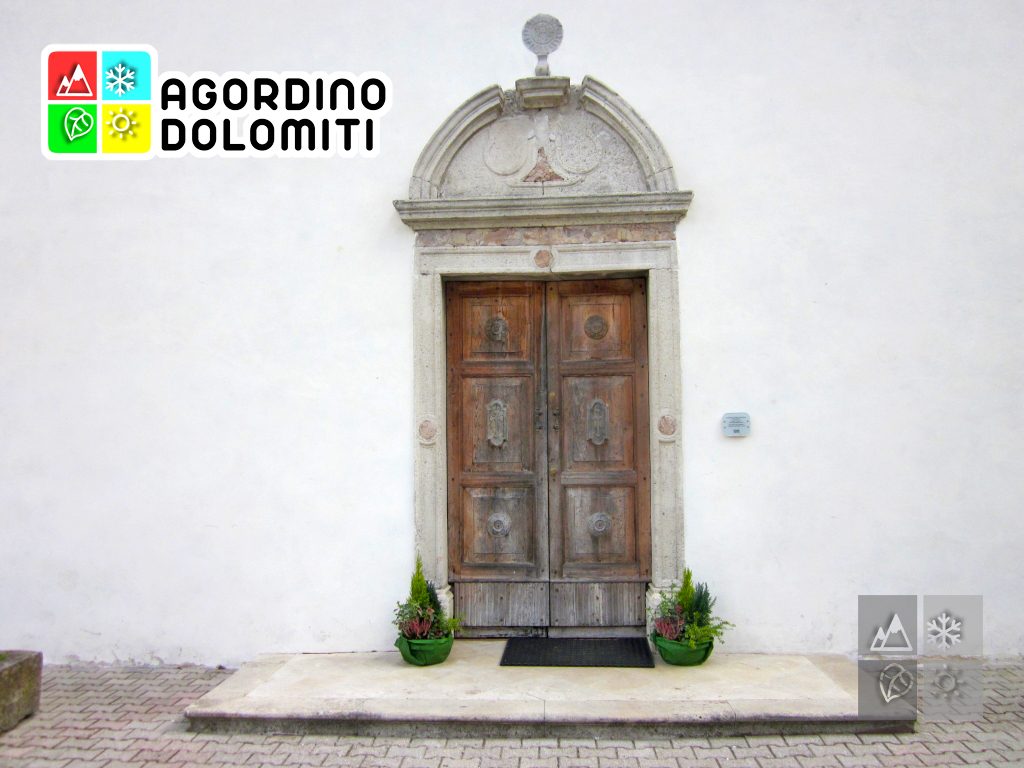 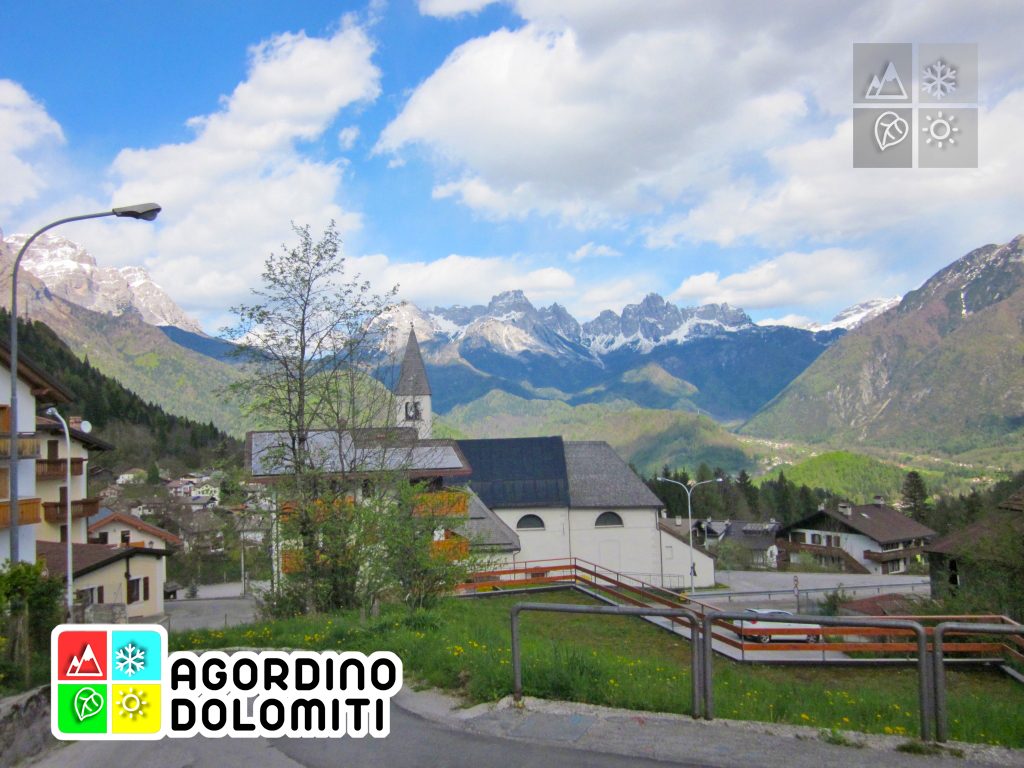 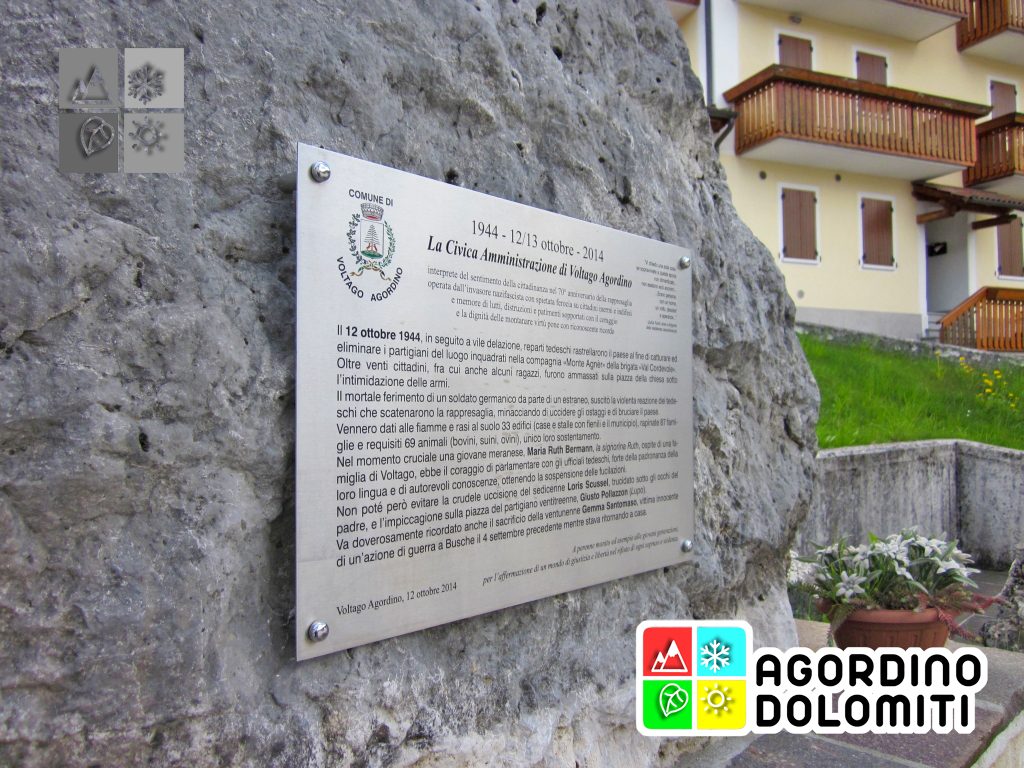 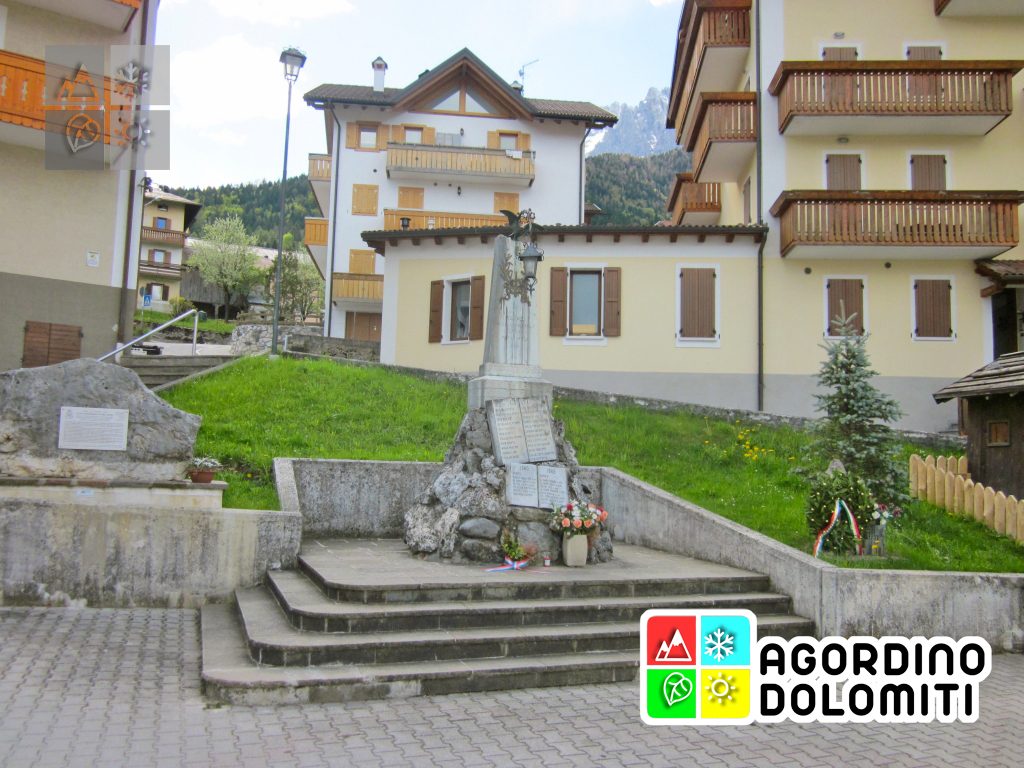 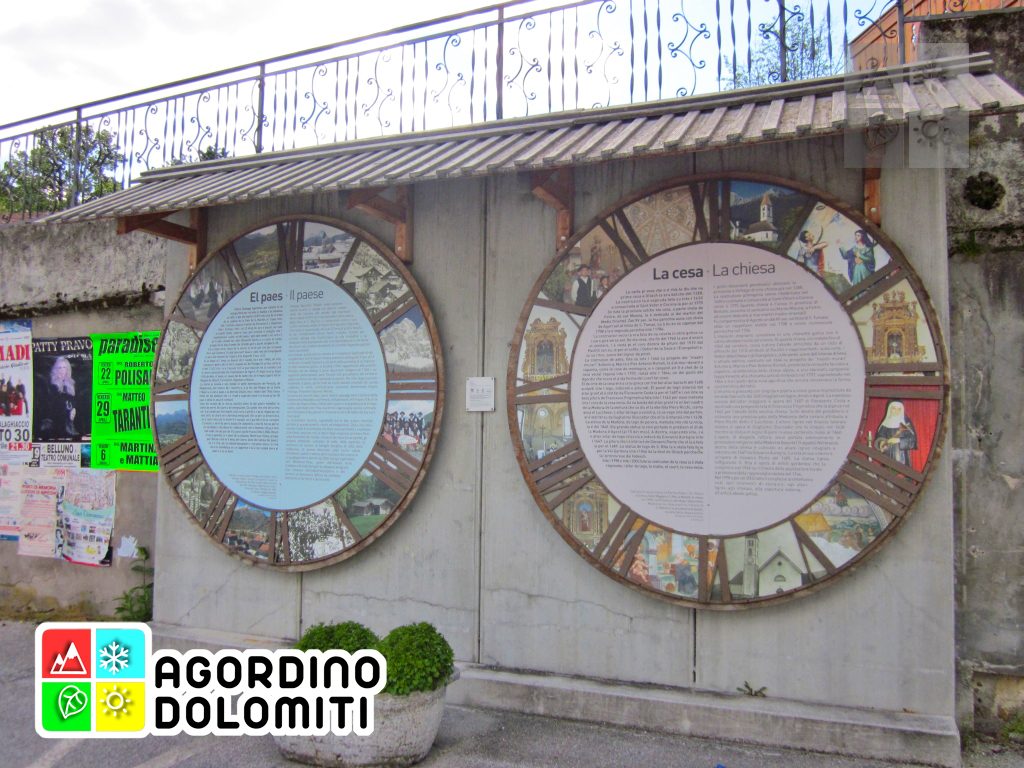 Voltago Agordino is crossed by many charming trails and paths; some of these have been used for the recent thematic path “Na Olta Oltach” (something like “Once upon a time in Voltago”). The Troi de le Berte (“Tales’ Path”) has been equipped with a series of panels telling some of the most renowned and interesting stories of the Agordino folklore; the path is suitable for families and non-sporting guests and it can be taken along the trail that starts off in Via Sturz towards the above mentioned Sass de la Madonna. 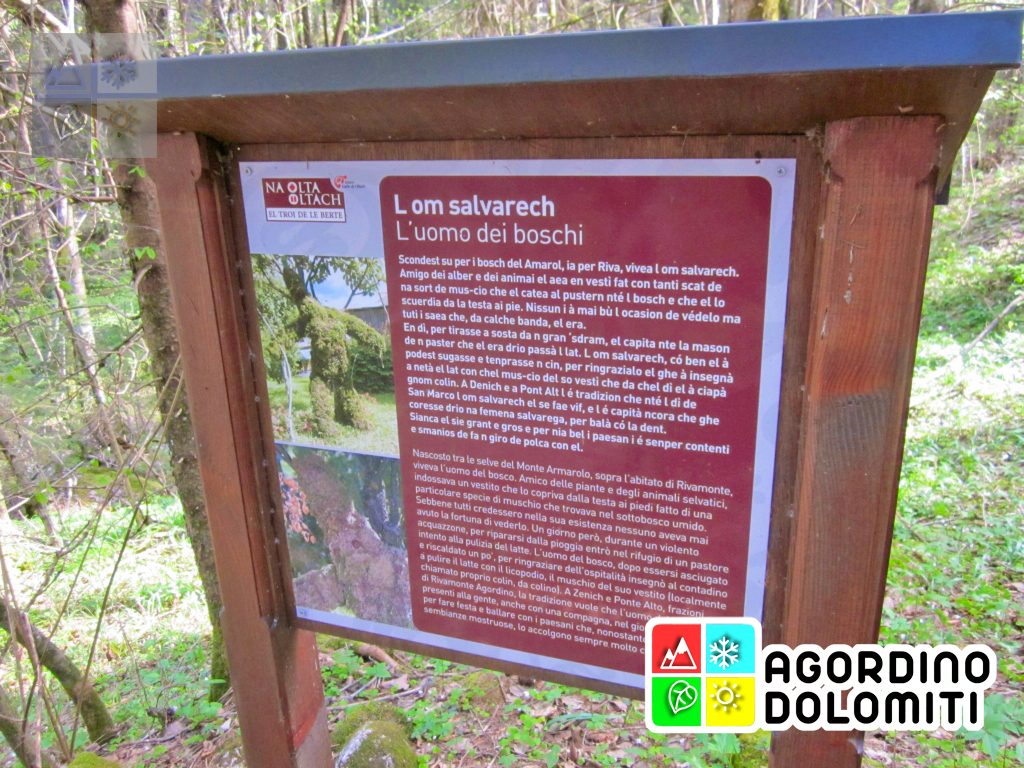 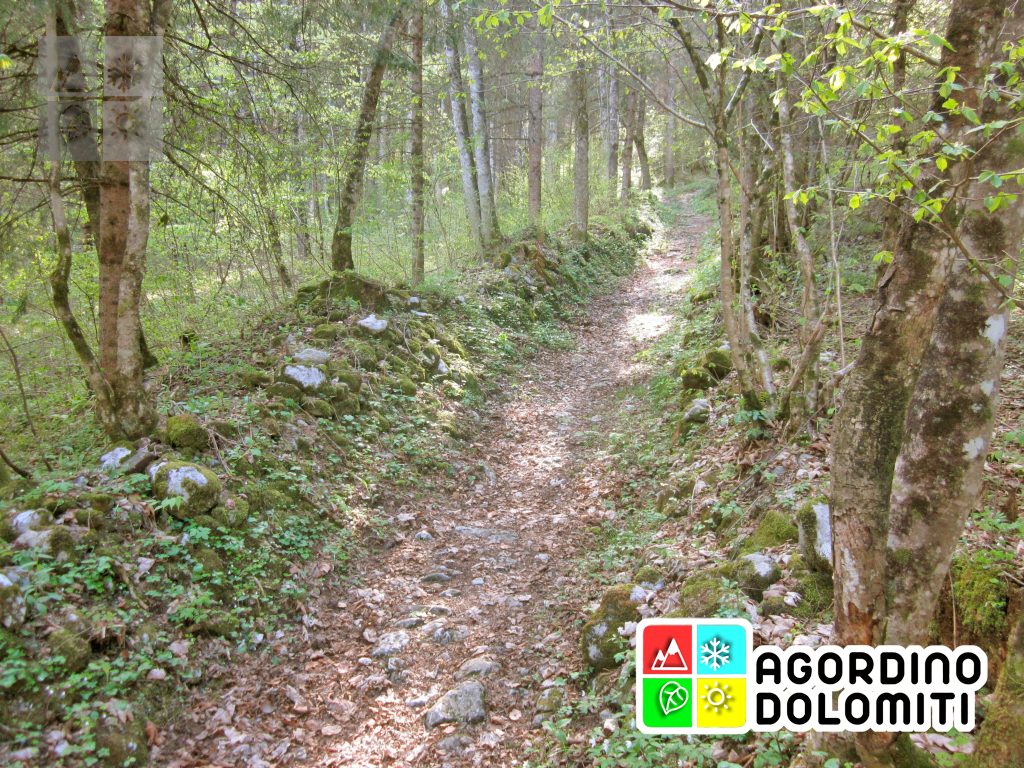 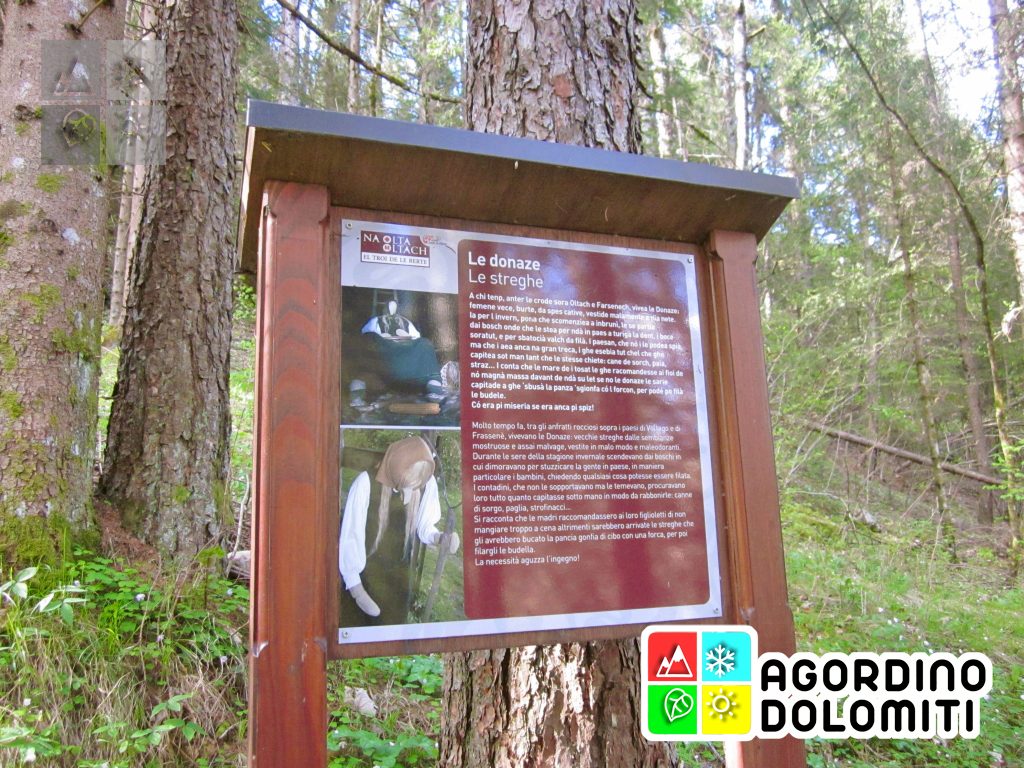 Another recent investment in tourism is represented by the so-called Giro de le Zime (“Peaks’ Tour”), a charming walk of 4.5 km equipped with info panels and fitness trail. The Giro de le Zime is suitable for most of the guests of the area, panoramic and fun; it presents easily the majority of the Dolomites groups that surrounds the Conca Agordina. 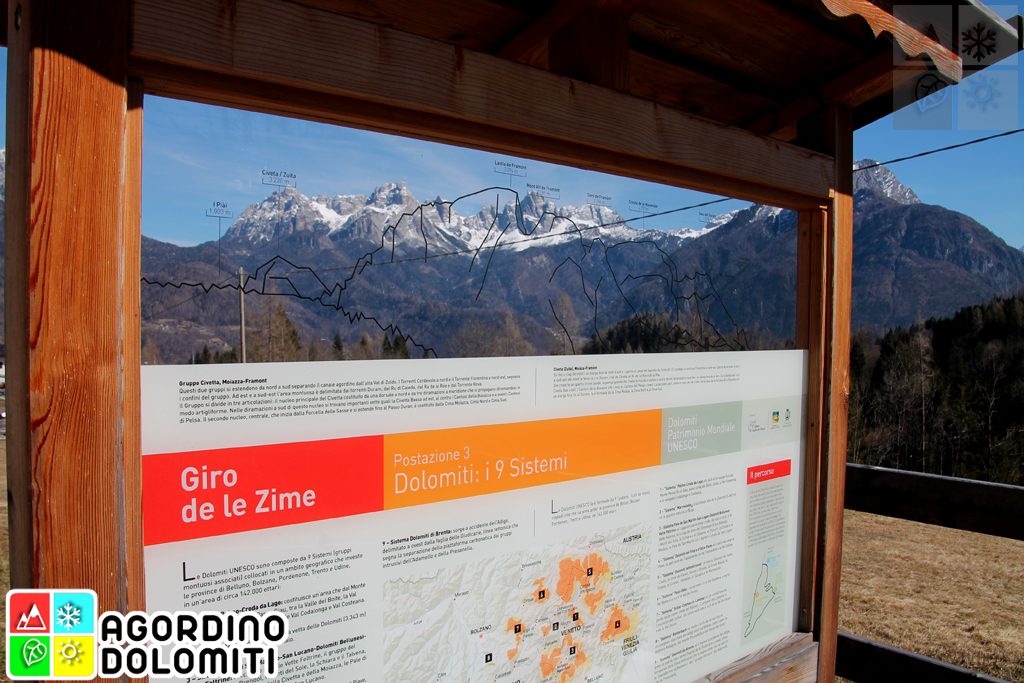 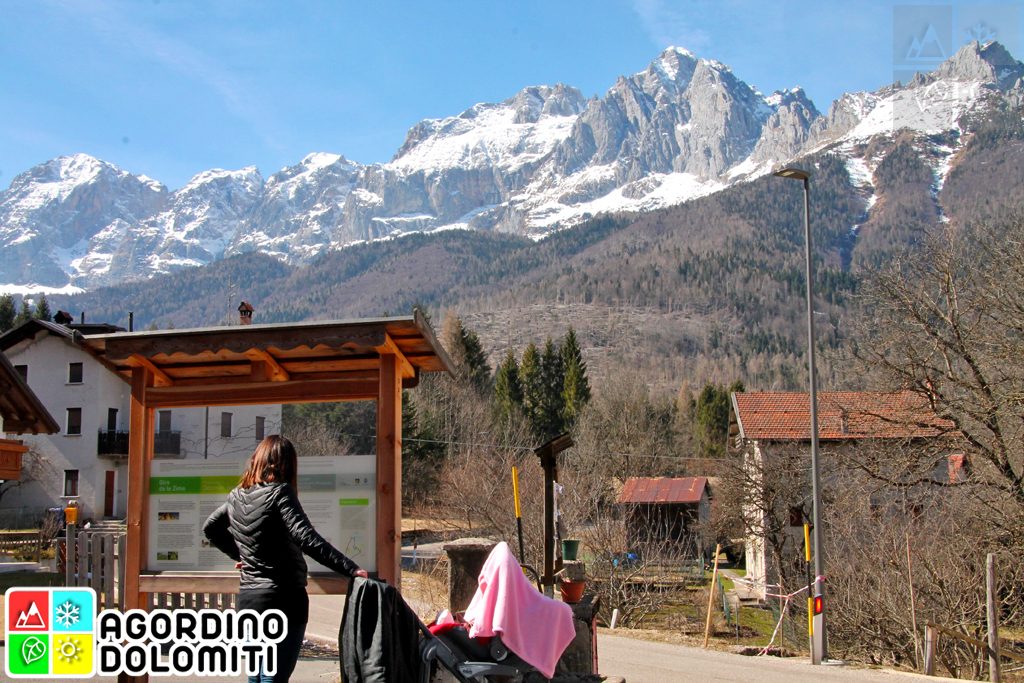 The village of Frassené, located at an altitude of 1100 meters above the sea levenl at the foot of the striking Mount Agner, is located a few kilometers far from Voltago Agordino along the Provincial Road 347. The etymology of this place name suggests a connection with the ash tree (fraxinus excelsior L., “frassino” in Italian, “fràssen” in the local Agordino dialect), a plant that grows spontaneously in the area.

Originally, the modern Frassené was divided into two different hamlets, Vich and Villa, equidistant from the old Church of Nicola di Bari, still visible near the newer church. In the past, the steep meadows and woodlands at the foot of the Agner were extensively exploited for cultivation, breeding and timber production. Emigration was a common activity among young people (a numerous communitiy of Voltago people still lives in Birmingham, Ohio, US) and practised the professions of chocolate maker (“ciocolatér”), chair maker (“contha” or “careghéta”), miner. 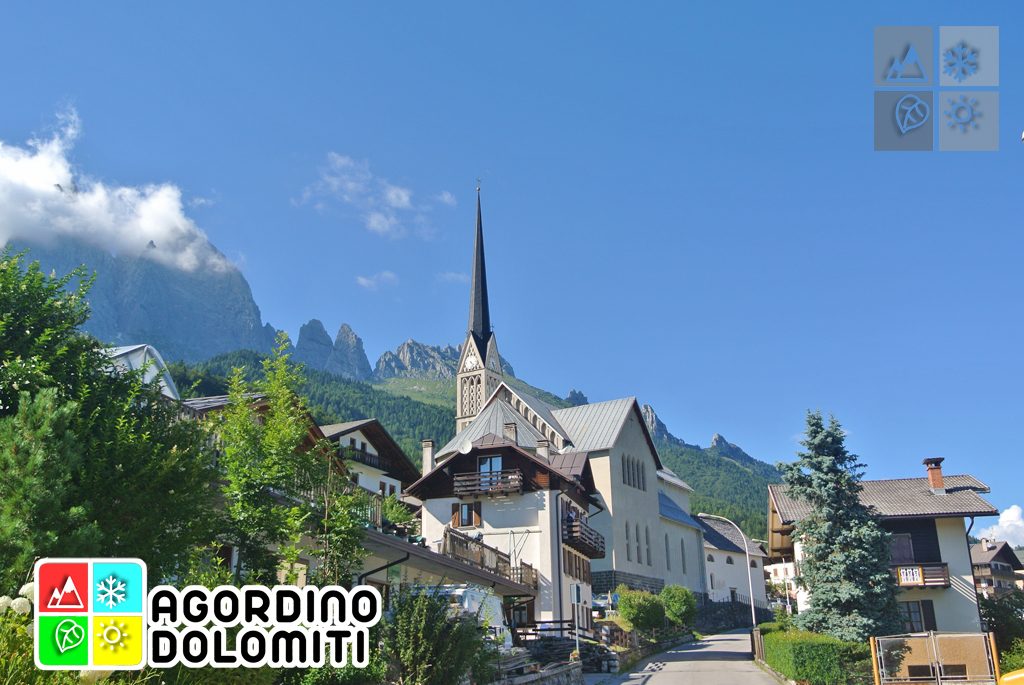 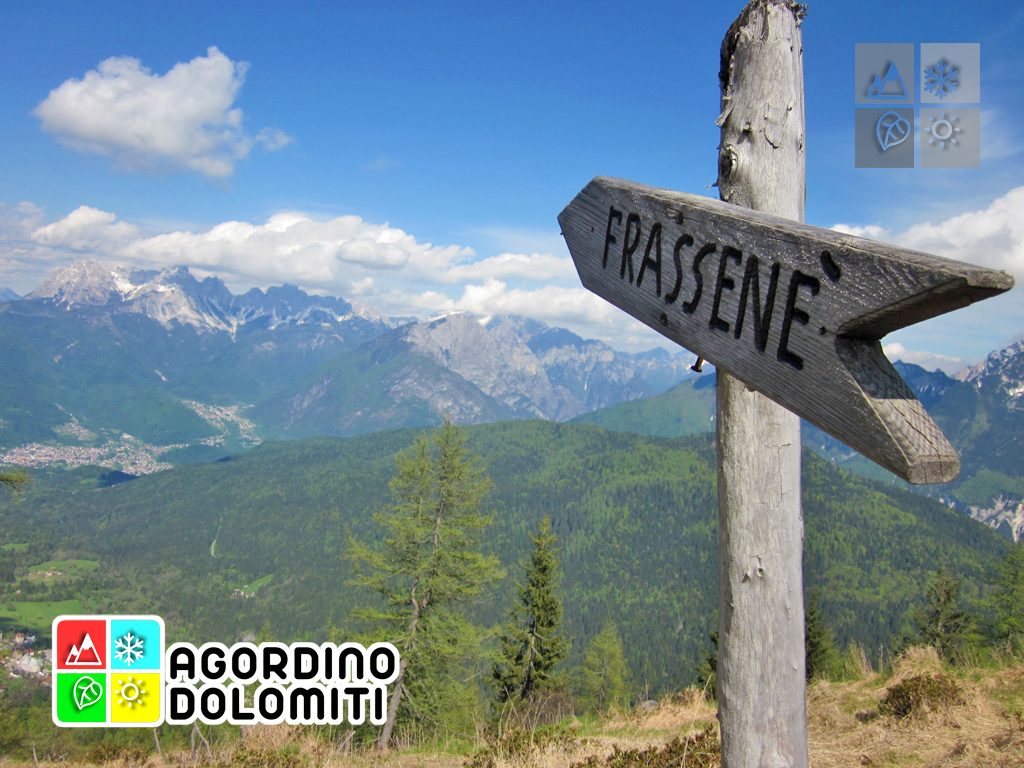 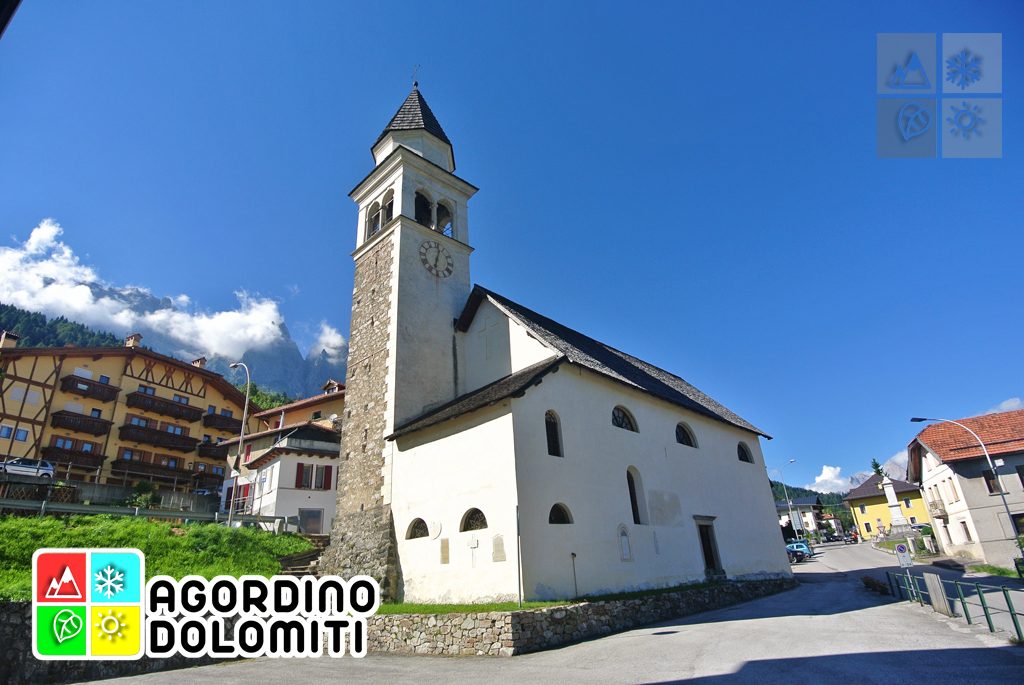 Starting from the beginning of the 20th Century, the fortune of the village had an unexpected upsurge: Frassené became quickly a very popular tourist destination of the Dolomites, especially among the Venetian nobility. The first hotel (“Albergo Venezia”) was inaugurated in 1902, followed by many others; as people in Italy (and Europe) came here on holiday, Frassené was growing in importance and prestige, so as to be widely known in the 1950s and 1960s as the “Little Cortina”, with reference, of course, to the nearby Cortina d’Ampezzo.

In order to face this huge growth in popolarity, Frassené gave birth to the first Tour Operators Association in Italy (the first of the still present Italian “Pro Loco”) in 1930; this important step in the development of tourism welcoming was highly sustained by the famous Armenian engineer Ohannes Gurekian, Director of the SADES (predecessor of the National electricity management company), who was in love with Frassené (he will eventually marry a woman from Frassené). Gurekian and the Venetian circle of nobles started investing in Frassené, building up hotels and restaurant (of which the “Parco Laghetti” still represents one of the most remarkable proof of that time) and even the famous Rifugio Scarpa – Gurekian, which was originally conceived and built up as the personal atelier of painter Enrico Scarpa in 1912, when it was called “Eremo Resele”. Frassené housed the first ski lifts of the Agordino area, built up in 1956, the same year of the famour Cortina d’Ampezzo Winter Games.

Frassené experienced more than 50 years of tourism fortune; the Agordo-Frassené motor race was one of the most popular races in Italy. The increase of visitors was so remarkable, that the old Church of San Nicola was abandoned for the more spacious and luxurious church, realized by Gurekian in neo gothic style and inaugurated by Pope John Paul I in 1968, at the time Cardinal of Venice. 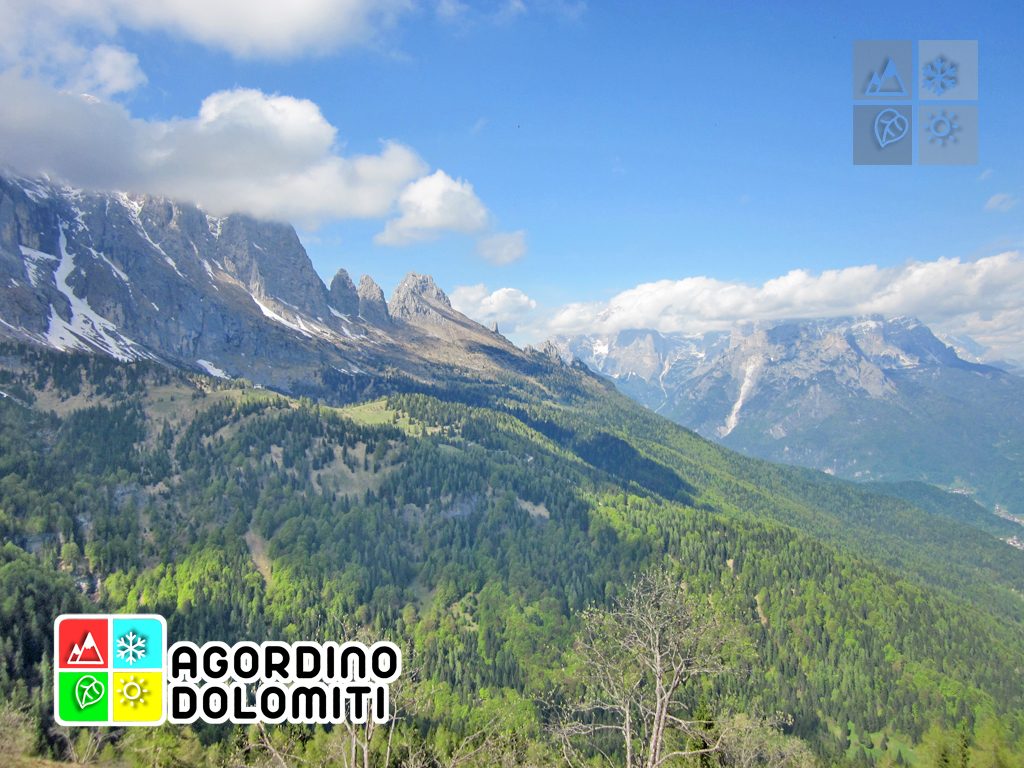 The end of the tourism golden era for Frassenè was marked by the tremendous flood in 1966, a catastrophic event that changed profoundly the history and aspect of the whole Agordino area. After the destruction of hotels, roads and bridges, the village didn’t have the power to restart a fruitful tourism promotion aimed at generational turnover of loyal tourists. Frassené was practically abandoned in the next decades, even if the signs of its glorious past can still be found on the facades of the ancient hotels that can be seen along Viale della Vittoria in the town center, then converted into private apartments. The ski lifts that once led from the town center to Malga Losch are closed down permanently for years now, and the ski area was dismissen in the early 90s. 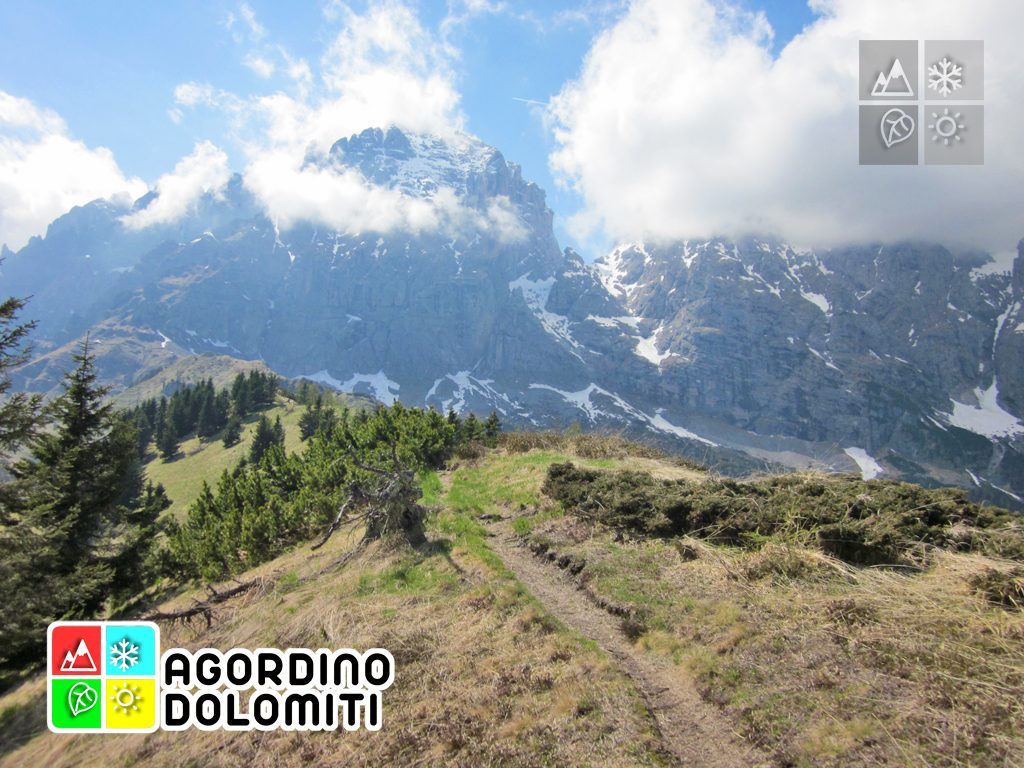 Despite the tourism decline of the resort and the conseuqent depopulation, nowadays Frassené is however an appreciated mountain destination of the Dolomites. From Frassenè, guests can enter the Pale di San Martino area and climb Mount Agner, the Giant of the Dolomites, in many ways (Via Normale, Ferrata Stella Alpina, Canalone and with hard climbing routes). Not far from Rifugio Scarpa-Gurekian, climbing enthusiasts can enjoy the Spiriti dell’Aria climbing wall. The area is furthermore rich in marvelous hiking trails.  The northern wall of Mount Agner offers the highest vertical wall of the Dolomites (1000 meters) and the second in the whole Alps: for this reason, Mount Agner is popular among the enthusiasts of windsuiting and base jumping. 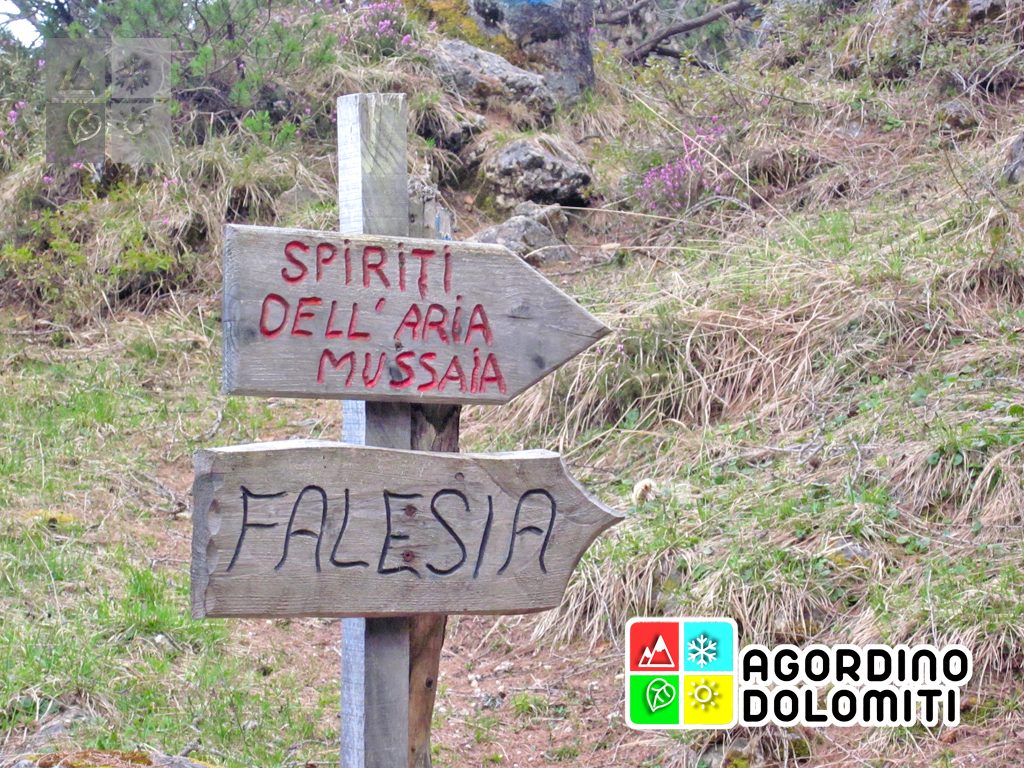 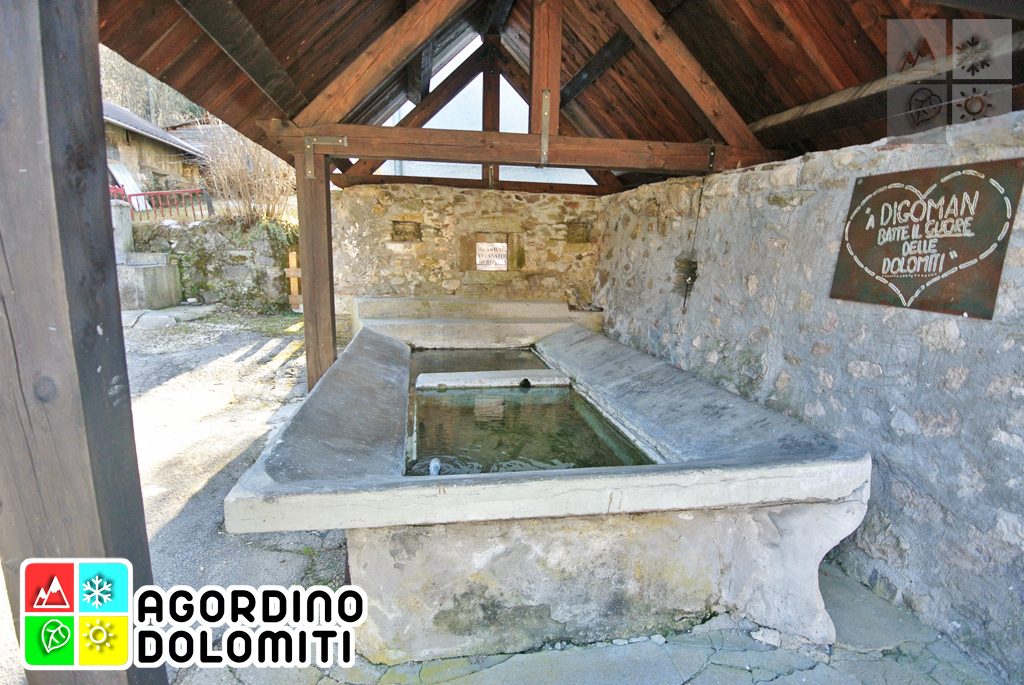 Rifugio Scarpa-Gurekian is an attraction itself: the wonderful Art Nouveau building has been renewed throughout the past years and it ejoys recently the management of Marco Bergamo, a local experienced Mountain Guide, that has enriched the event schedule and the culinary offer of this marvelous Alpine rifugio.

The municipal area of Voltago Agordino is nowadays undoubtedly a little-exploited tourist area, but with some relevant advantages to promote natural tourism: the environmental context of the village is beautiful, with Mount Agner and Croda Granda as protagonists of the landscape; towards Gosaldo, cyclists and motorbikers can enter the beautiful Giro del Poi and Passo Cereda; the area is full of charming larch and beech woods, which are particularly beautiful in Autumn. The Laghetti area offers some climbing walls for beginners, and the area is a natural pearl of the Dolomites far away from noise and pollution, a place to be discovered and loved. 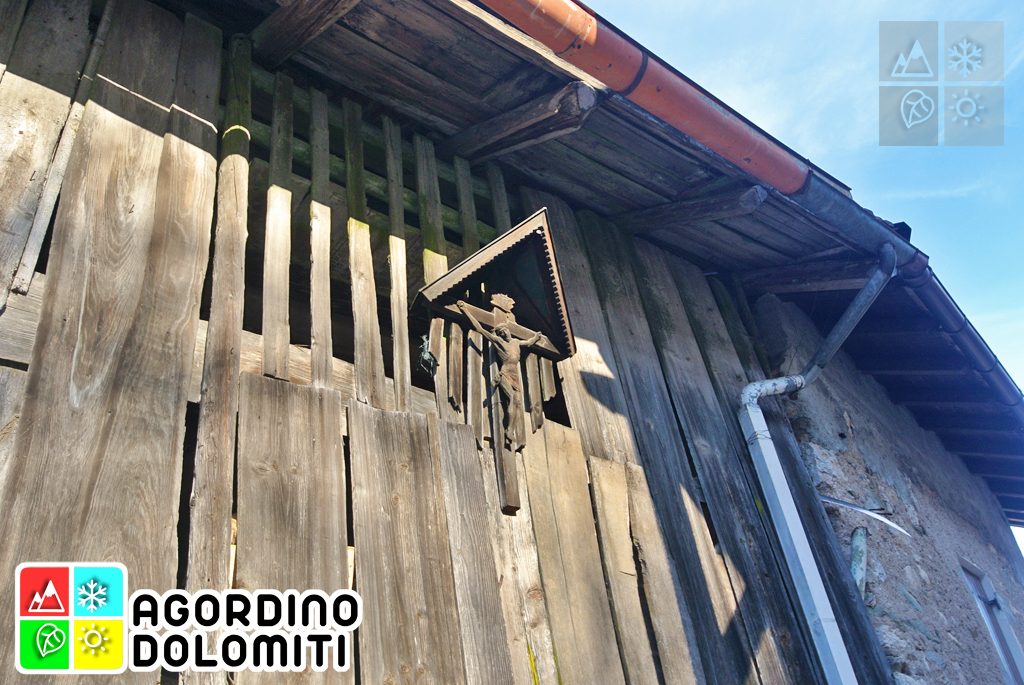 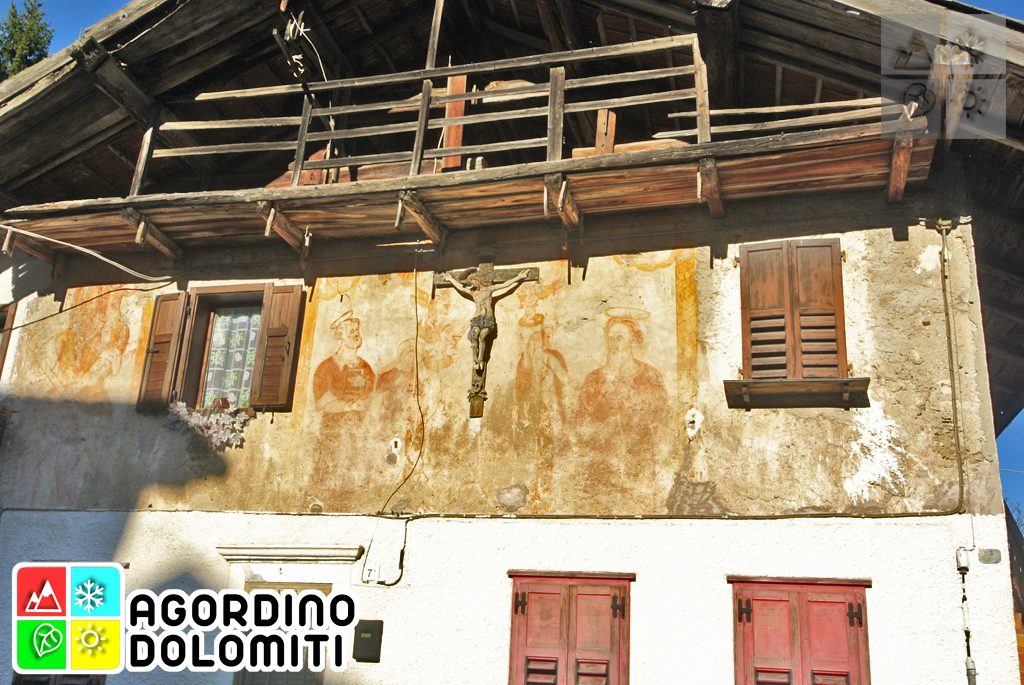 Go to: Resorts in the Agordino area