Selva di Cadore is a marvellous mountain village of the Dolomites UNESCO World Natural Heritage Site located in the Fiorentina Valley at the foot of the 1st of the 9 official systems recognized and protected by the UNESCO Dolomites Foundation, that is the Pelmo – Croda da Lago System; Selva di Cadore is a Municipality of the Agordino devoted to tourism that present itself like a beautiful village, composed of many different hamlets (the ancient “Vile”), surrounded by a splendid and verdant valley with a beautiful view on Mount Pelmo – Croda da Lago system, the Cernera mountain range, the mountains of the 2nd (the Marmolada) and 3rd (Mount Civetta above all) dolomitic systems. Selva di Cadore is one of the four tourist resorts that build up the Ski Civetta ski area, member of the Dolomiti Superski; the access point to the ski area for Selva di Cadore is the hamlet of Pescul with the Pescul – Fertazza chair lift. 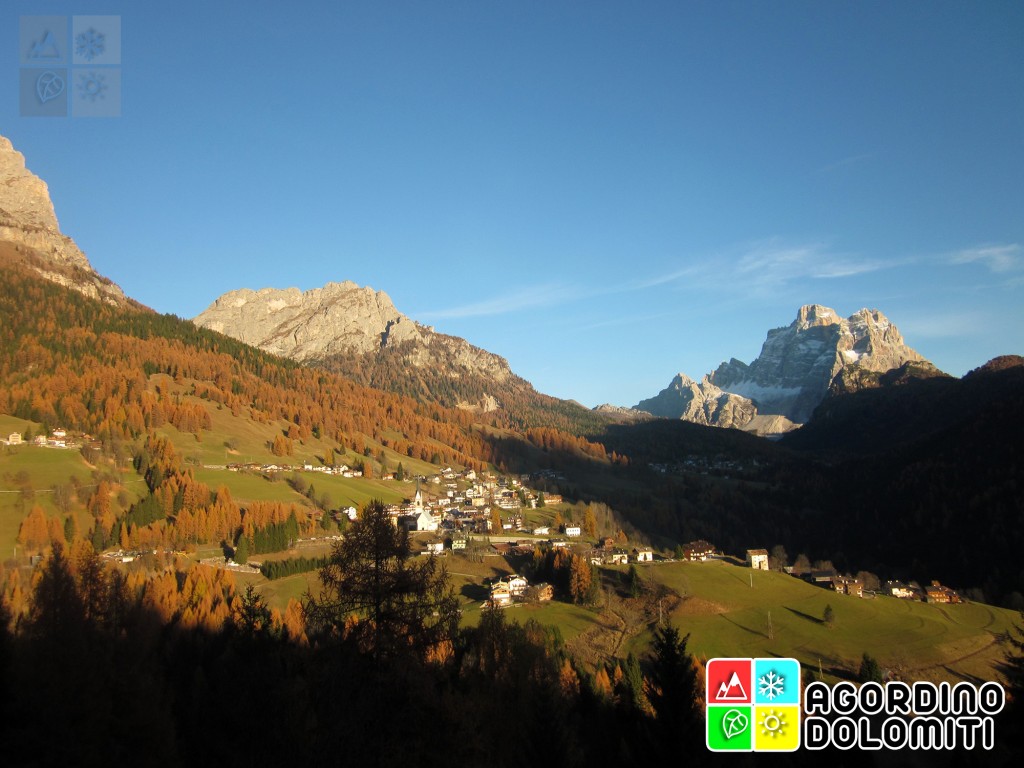 As suggested by the toponym, Selva di Cadore was in the past (until the Treaty of Campo Formio in 1797) subjected not to the Regole of the Agordino area, but to the Regole of the Cadore area; Selva was indeed a property of the Municipality of San Vito di Cadore and it was a sort of protectorate of the Cadore. According to the historical sources in our possession, the inhabitants of the Cadore could have been indeed the first colonists of the Fiorentina Valley in the 13th Century: they settled in this place probably because interested in the environmental assets of the Fiorentina Valley (wood, cultivable areas and iron ores above all). Also the name “Fiorentina” seems to have a Cadore origin: it could have been the first name of a noblewoman of the 15th Century that probably lived in Selva di Cadore. An interesting itinerary that shows the ancient bound between Selva di Cadore and San Vito di Cadore is the Forcella Forada route.

In addition to wonderful hikes and an astonishing natural context, cozy mountain huts located in panormic positions, path suitable for trekking, MTB and a lot of other mountain sports and to the infinite possibilities given by the lift of the Ski Civetta, Selva di Cadore offers to its guests a wide choice of services addressed to families as well as modern sports facilities: in the hamlet of Santa Fosca there are indeed the municipal sporting areas and the nearby Bar Baita Al Sole organizes often a lot of activities addressed to the little guests of the Dolomites.

Selva di Cadore boasts also a remarkable cultural offer: a few steps far from Piazza San Lorenzo, the main square of Selva di Cadore, lies the interesting “Vittorino Cazzetta” Public Museum of the Fiorentina Valley, the jewel in the crown of the cultural offer of the area: it is a modern exhibition space divided in 3 interesting section dealing with the paleontological, archeological and the historical past of the Fiorentina Valley and of the Mount Civetta area. The most famous piece of the Museum of the Fiorentina Valley is without any doubt the remains of a hunter – gatherer of the Mesolithic (he lived almost 7500 years ago), the so-called “Om de Mondeval” [Man from Mondeval]: the body of the hunter was found by local history enthusiast Vittorino Cazzetta close to a rock on the Mondeval de Sora Plateau and it was recovered by a team of the University of Ferrara. In addition to the Man from Mondeval, the Museum of Selva di Cadore offers also dozens of other interesting items: Roman finds, casts of dinosaur footprints, the finds of the Neolithic site of Mandriz, many finds found on the Iron Routes of the area and much more. Furthermore, the Vittorino Cazzetta Museum organizes during the period of major influx of tourists entertaining guided tours and activities for the whole family thanks to the work of the Amici del Museo Association. 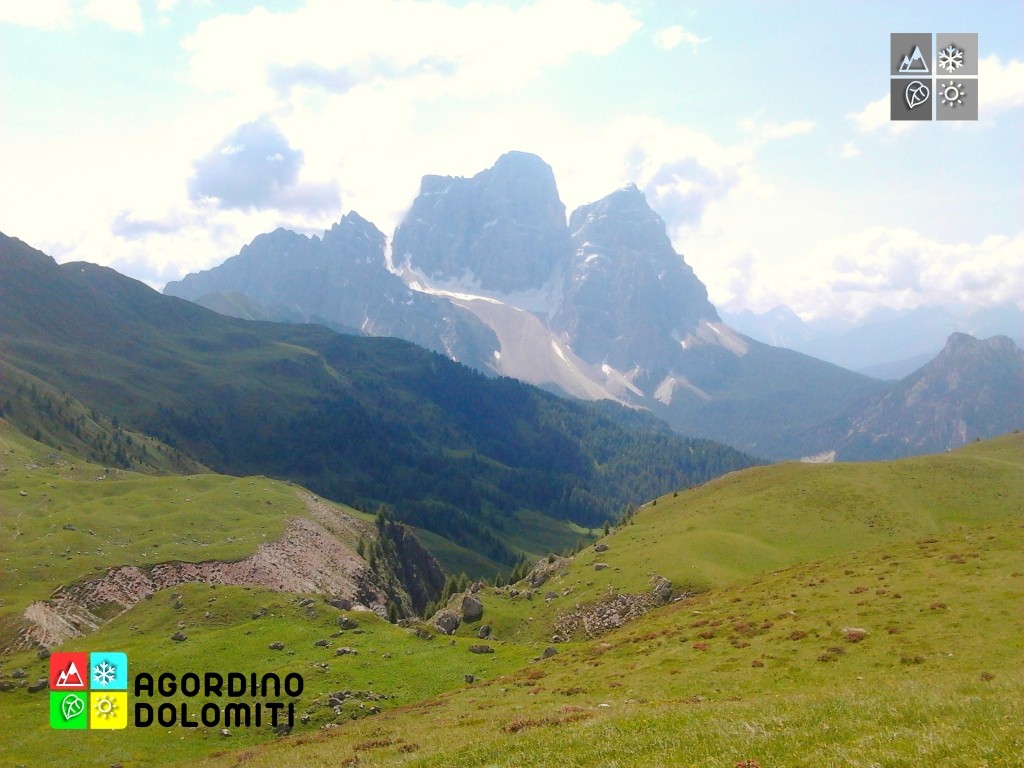 On a rock located under the Pelmetto on Mount Pelmo, reachable both from Selva di Cadore and Palafavera there’s a rock with more than 200 dinosaur footprints; a cast of this rock is housed in the Vittorino Cazzetta Museum. Not far from the hamlet of Toffol, guests can visit another archaeological site of the Fiorentina Valley, the Mandriz site; the place is well indicated by many signs and it is a nice hike for the whole family. 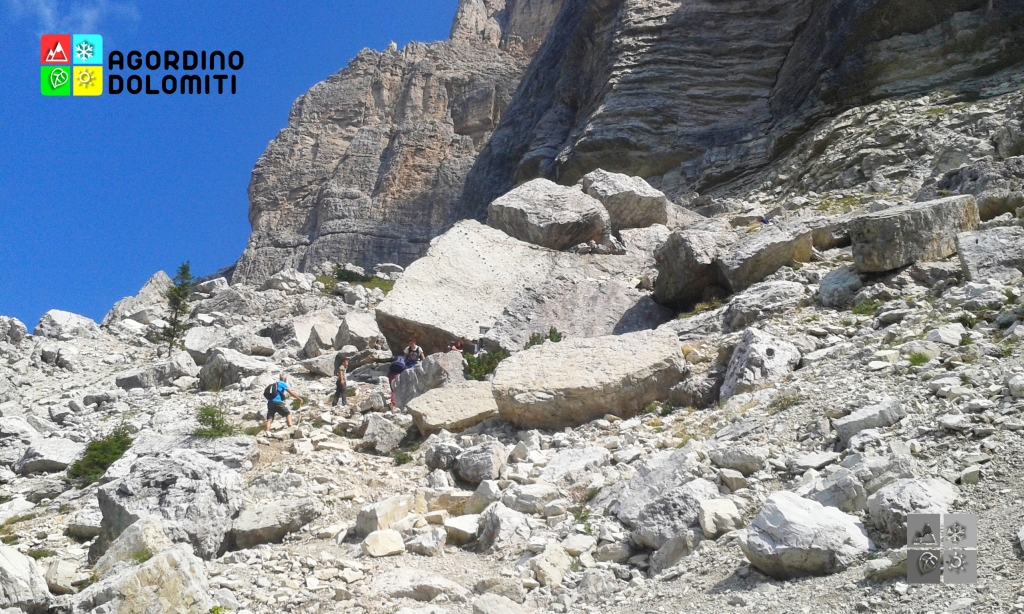 The rock with the dinosaur footprints at Mount Pelmetto

At the beginning of the 20th Century, during a excavation works in the hamlet of Solator, a strange tunnel was accidentally discovered: it is the Solator medieval tunnel, an ancient gallery, dated 13th Century, that probably connected a tower [‘Solator’ means probably ‘Sotto-la-Torre’ – “behind the tower”] to an ancient manor of which nothing remains. The tunnel is visitable in summer with the guided tours promoted by the Amici del Museo Association. During the 2015 summer, an archaeological excavation led bu the Ferrara University in Casera Staulanza found many interesting objects belonging to a human community that lived here in the Paleolothic, so many millennia before the Mandriz site and the Mondeval hunter. The excavation is still going on.

The ancient “Vile” (the historical hamlets of Selva di Cadore) of L’Andrìa and Toffol are another interesting architectural attraction: they are two ancient villages that miraculously survived the modernization of recent decades that offer in every corner the charm of the authentic hamlets of the Dolomites UNESCO World Natural Heritage Site. Both hamlets can be visited autonomously or with the interesting guided visits of the Amici del Museo Association.

Selva di Cadore offers a suggestive picnic area in the hamlet of Pescul towards Passo Staulanza: the Ai Palui picnic area requires a modest fee used to maintain the area.