A dolomitic pearl of history and nature

Located in the south-western part of the Conca Agordina, Rivamonte Agordino (called “Riva” in the Agordino dialect) is a charming village of the Dolomites UNESCO World Natural Heritage Site in the Italian Province of Belluno, Veneto Region.

Made up of small hamlets, sometimes very distant from each other, the Municipality of Rivamonte Agordino covers a remarkable surface (23,21 square kilometers) of wide and pristine UNESCO Dolomites area, rich in natural attractions such as the Dolomites peaks (Monti del Sole and Pala Group among the others) that surround this wonderful village of the Pale Mountains. 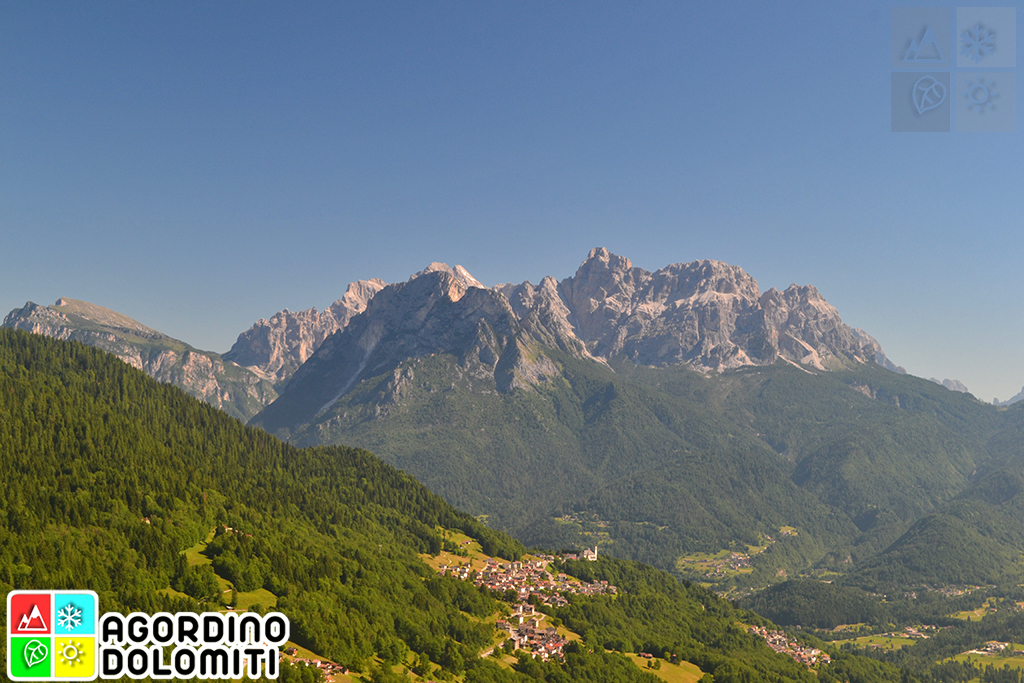 Sunny and panoramic, Rivamonte Agordino lies pleasantly at the foot of the Agner – Croda Granda chain (Pala Group – Pale di San Martino); from differents places of this Municipality, the view spans widely over all the Dolomites Systems of the Conca Agordina: the Monti del Sole and the Feruch, that close the valley to the South; Mount Celo, Mount Talvena and Cime di Zità (Schiara Group) on the other side of the Cordevole River; the San Sebastiano chain (Dolomiti Agordino or Dolomiti di Zoldo); the Civetta – Moiazza – Pelsa group (Dolomiti Agordino or Dolomiti di Zoldo); the peaks of the Marmolada Group (Piz Zorlet, Cime di Pezza, Southern wall of the Marmolada); the Pale di San Lucano (Pala Group – Pale di San Martino. 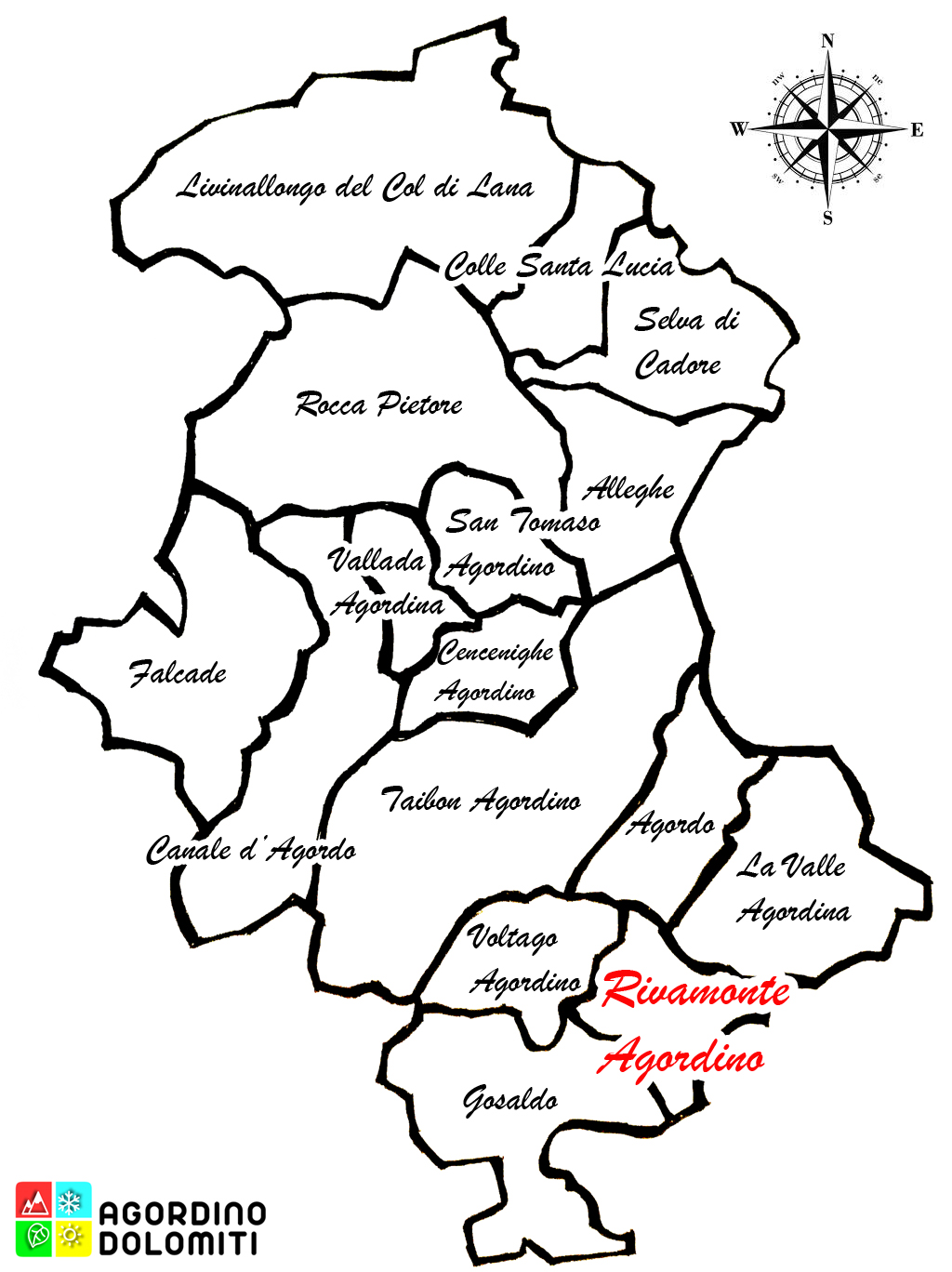 Towards the valley floor of the Conca Agordina lies the Colle Armarolo (Armaròl or Maròl in the local Agordino dialect); this hill is also portrayed also in the Municipal coat of arms. Rivamonte Agordino boarders with Voltago Agordino, Sedico, Sospirolo, Gosaldo, La Valle Agordina. To the South, towards the Valbelluna, there’s a narrow natural canyon dug by the Cordevole River, called “Tagliata di San Martino“. For a very long period, from the end of the Roman Era up to the end of the Second World War, the Tagliata has been considered a strategic and essential logistic point for the defense and control on the whole Agordino area. 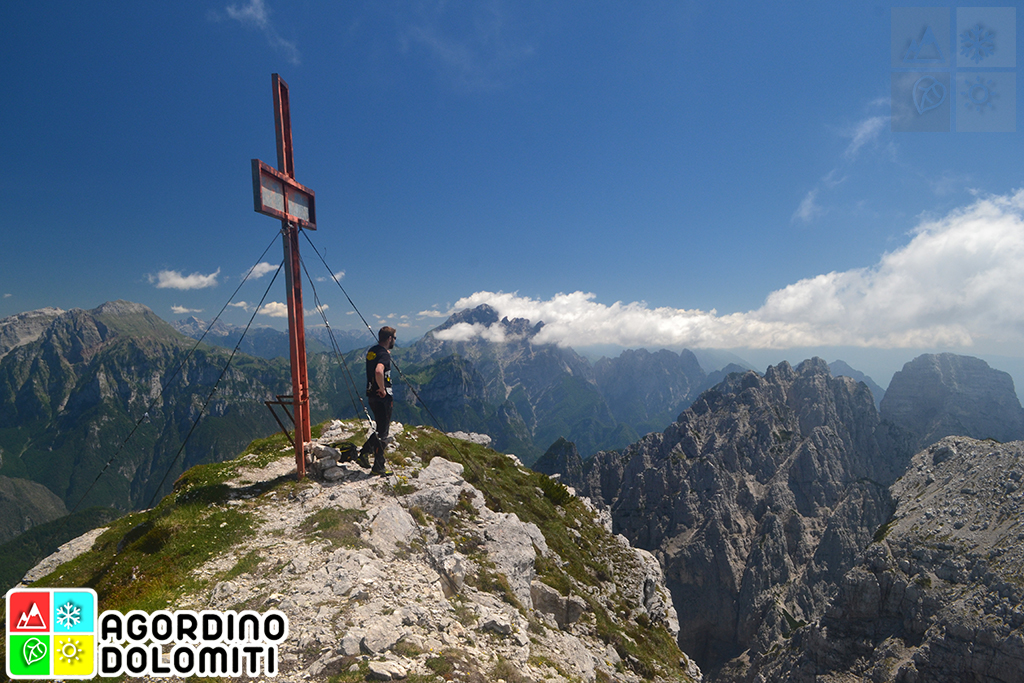 Almost 60% of the Rivamonte municipal area is included in the Belluno Dolomites National Park (Parco Nazionale delle Dolomiti Bellunesi) and it is therefore considered to all extent a protected natural reserve. 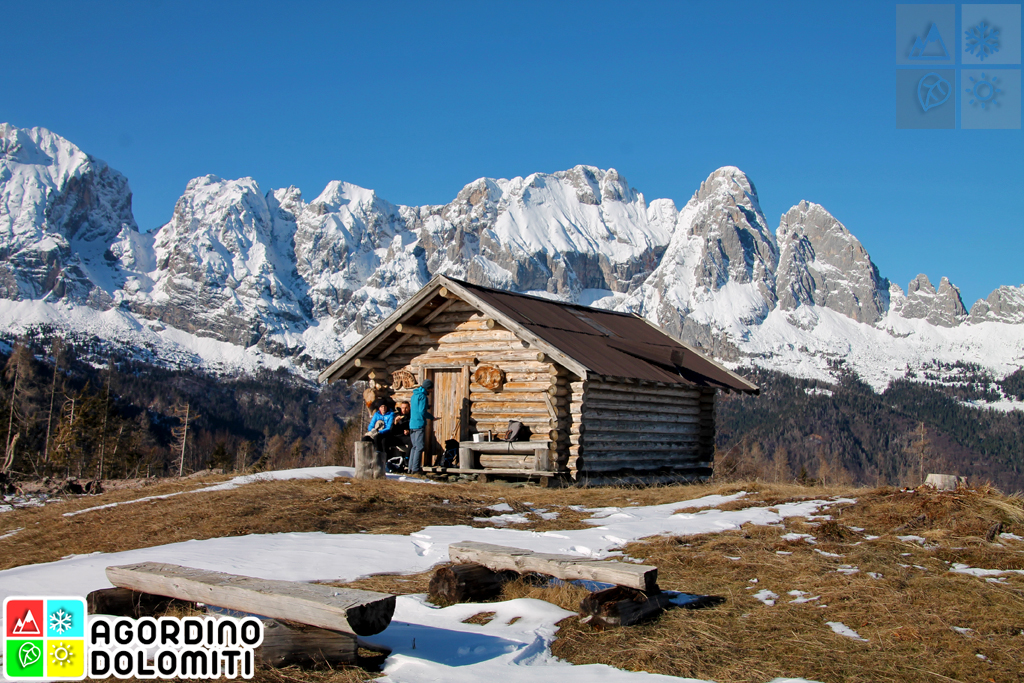 Casera Maròl and the Pala Group 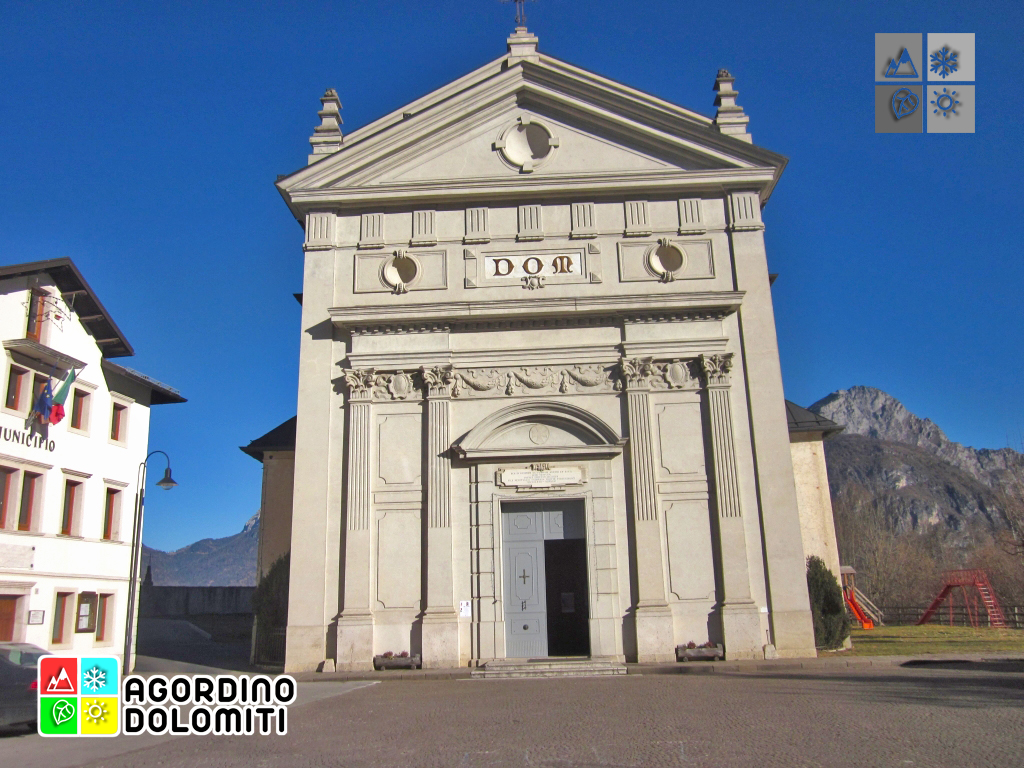 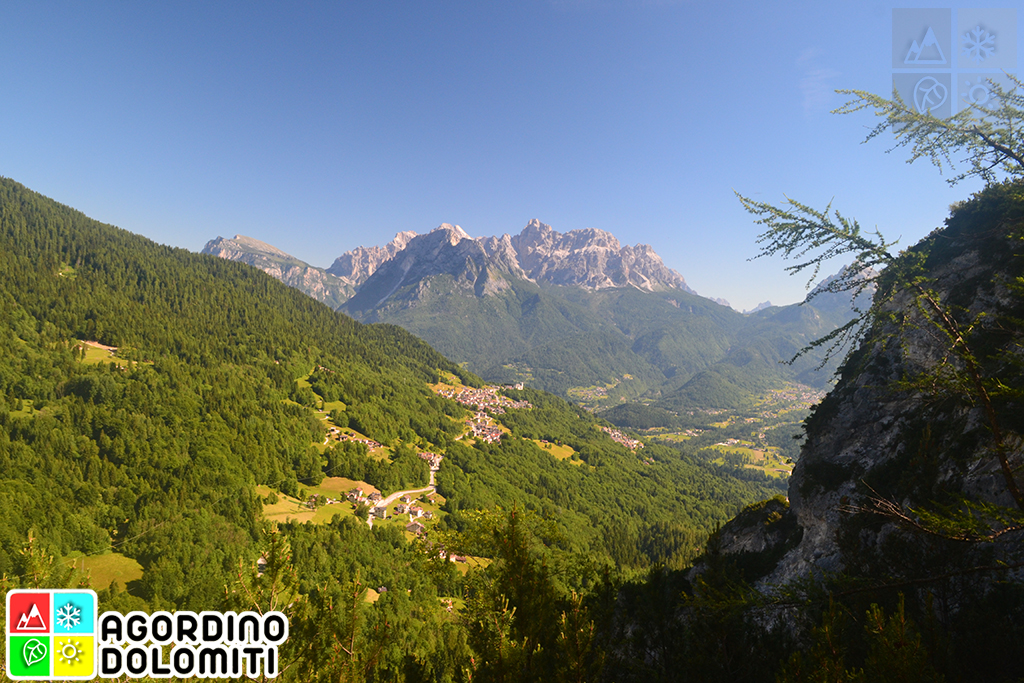 We do not know exactly when this village of the Dolomites was found; the first written attestations that explicitly deal with this places go back to the 13th Century A.D.; however, the presence in historical texts of local surnames might suggest the existence of this Municipality earlier than the 13th Century. The local Regola (A Venetian district council formed by the local heads of families) was active since the 15th Century.

During most part of its history, the greatest resource of the territory has been represented by the Val Imperina Mines; officially mapped by the Republic of Venice in 1411 A.D., the Val Imperina Mines were for sure already used long before this. Located along the impressive Val Sugana Fault, the Val Imperina Mines gave job to the greatest part of the workforce of the Conca Agordina, that worked in the mining tunnels or in the related supply chain (like, for instance, forestry works or charcoal production). The mining area of Rivamonte Agordino, including the mining tunnels and all the building of the mining complex, are nowadays included into the protected area of the Parco Nazionale delle Dolomiti Bellunesi; a careful restoration of the area is aiming to open soon this interesting historical treasure to the guests of the Heart of the Dolomites (further info can be found at the dedicated section > click here). 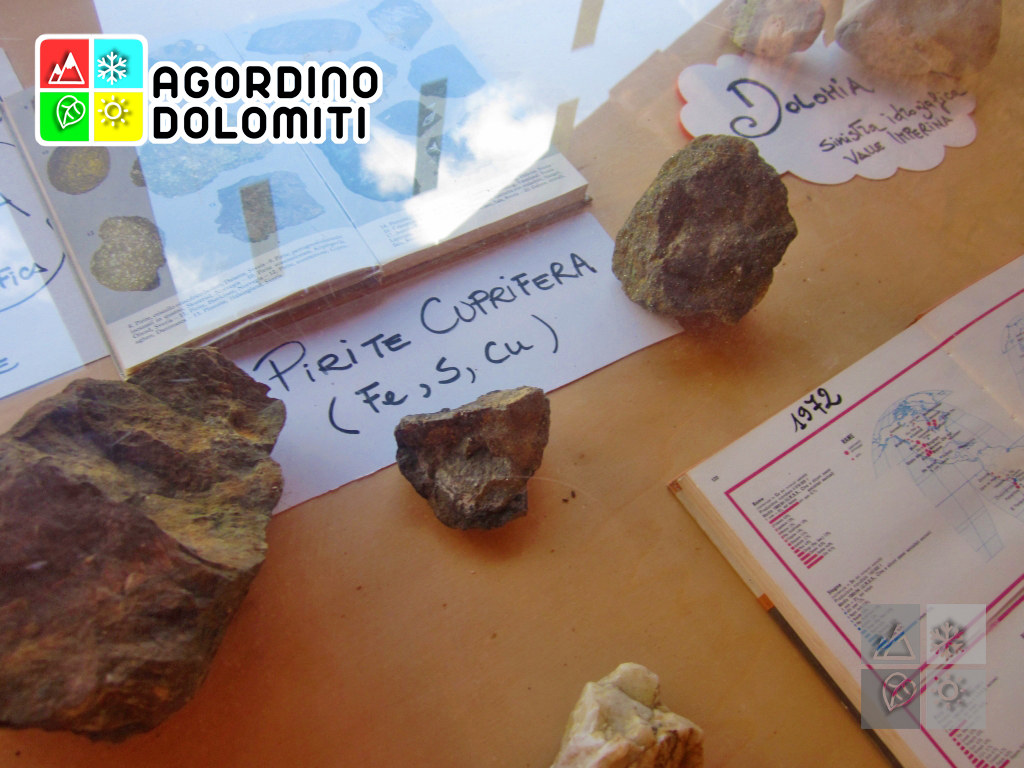 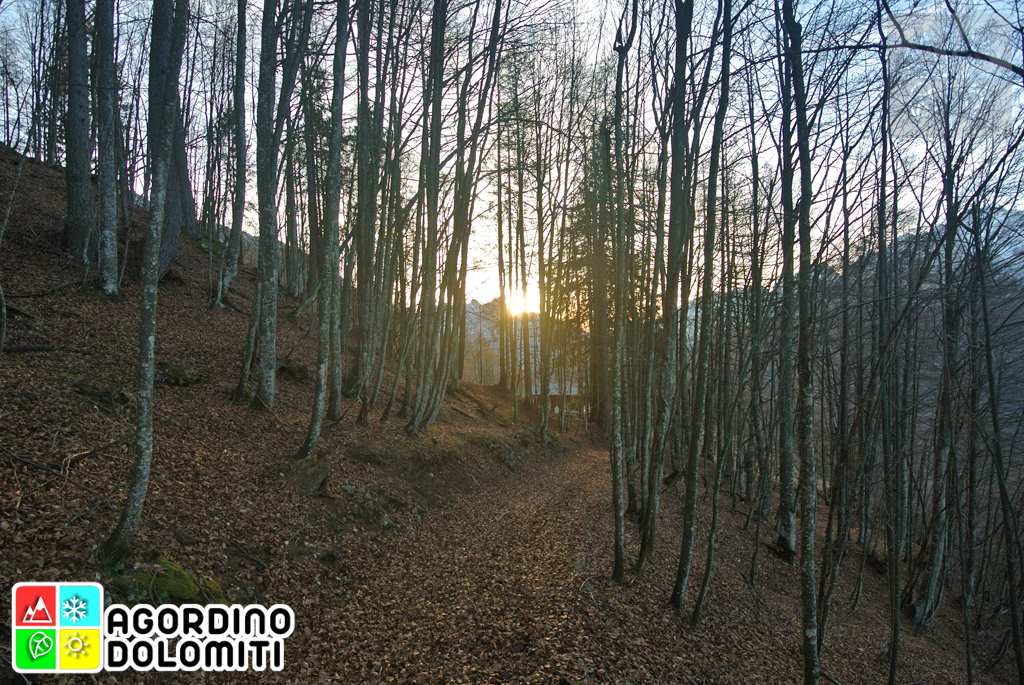 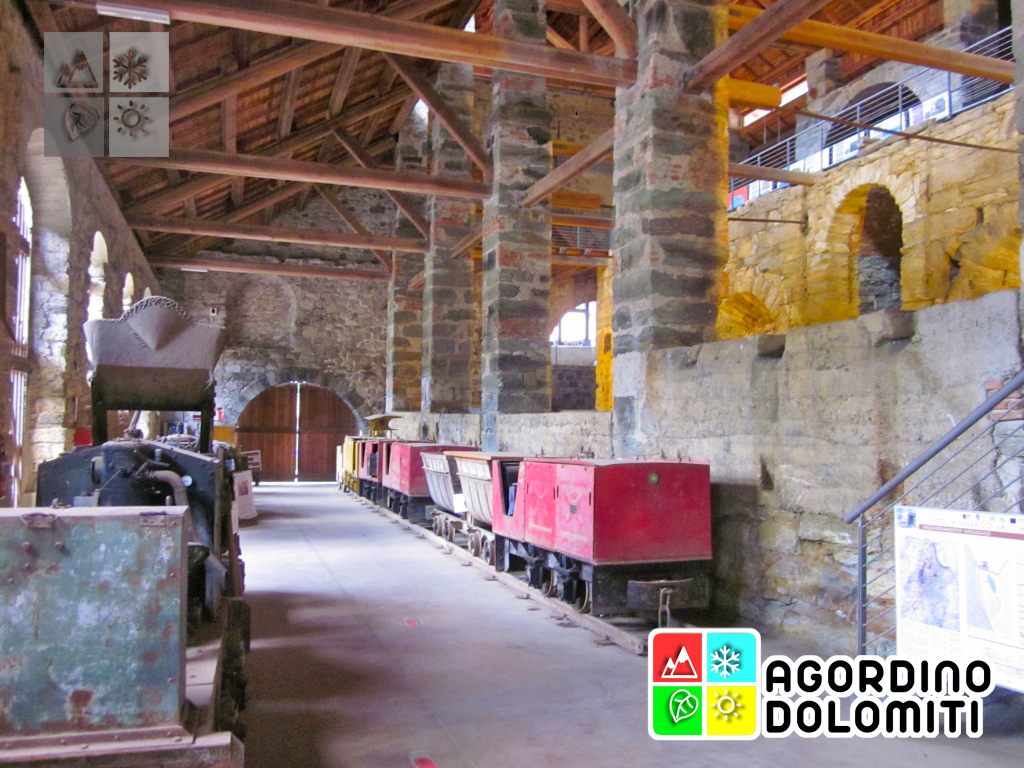 Rivamonte has been a land of strong emigration in the 19th and 20th Centuries; emigration was in some cases the last chance for many of the local Dolomite people, since there was a few space for agriculture and the mining jobs were often uncertain and poorly paid. Those who didn’t want to emigrate were compelled to sharpen their wits: it was in an effort to find a different source of income that the Rivamonte and Gosaldo people invented the job of the chairmaker (called “conthe” or “careghete” in the Agordino dialect, “seggiolai” in Italian). Since the 18th Century, the Rivamonte people left in Autumn to visit different European cities, where they practiced the itinerant profession of the chairmaker; they were skilled workers, and for this very appreciated. Their products, tools, cultural aspects, history and traditions is presented to our guests in the small but interesting “Museo del Seggiolaio” (“Chairmaker’s Museum”) of Rivamonte Agordino, open all year long on reservation. 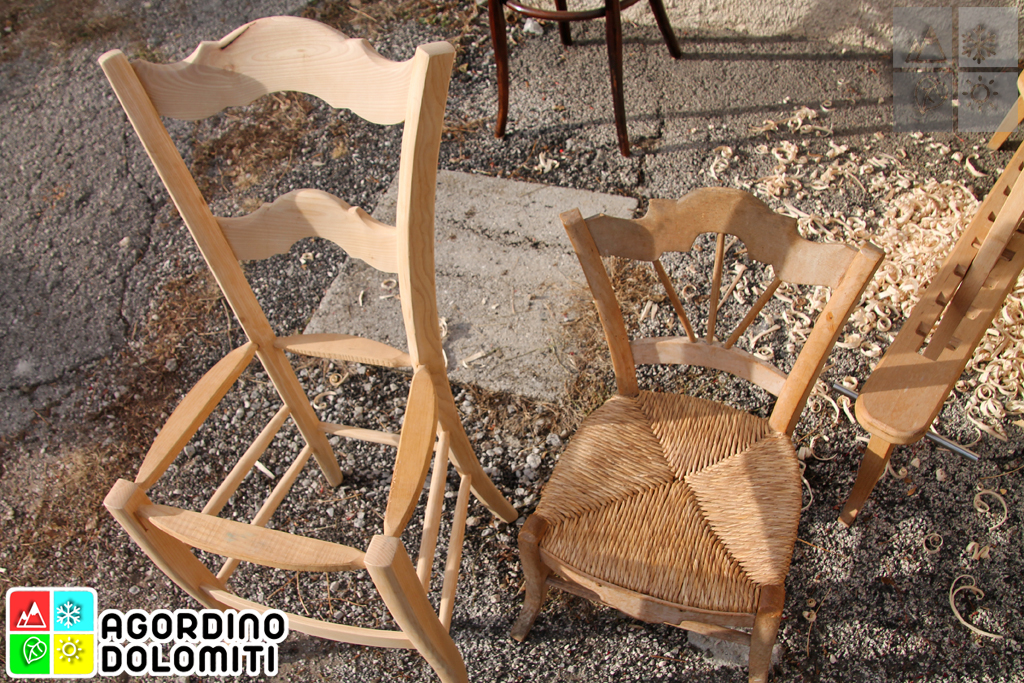 The traditional “carèghe” (dialectal word for “chairs”) are exclusively handmade and straw-waved by expert Agordino chairmakers. These portrayed here were displayed at the Riva Nadal Christmas markets

In Rivamonte Agordino and in general in the whole Conca Agordina there are some interesting remains of buildings and war posts from the Great War as well as from the Second World War. In the above mentioned Tagliata di San Martino canyon, in the exact same place in which the ancient Castel Gordino rose during the Medieval era, guests can visit the Tagliata di San Martino Fort: it is a Great War military fort, blown up by the Italian Army after the Caporetto debacle and then built up again by the Nazis between the Great War and World War II. Since the fort was never involved in active phases of WW2, the building is perfectly visitable with a very short walk in the Castei area. In order to get further pieces of information about this amazing war attraction, feel free to visit the dedicated section by clicking here. The route to Bivacco Le Mandre, today part of the historical path “La Montagna Dimenticata“, that connects the Tagliata di San Martino Fort with the Bivacco Le Mandre. 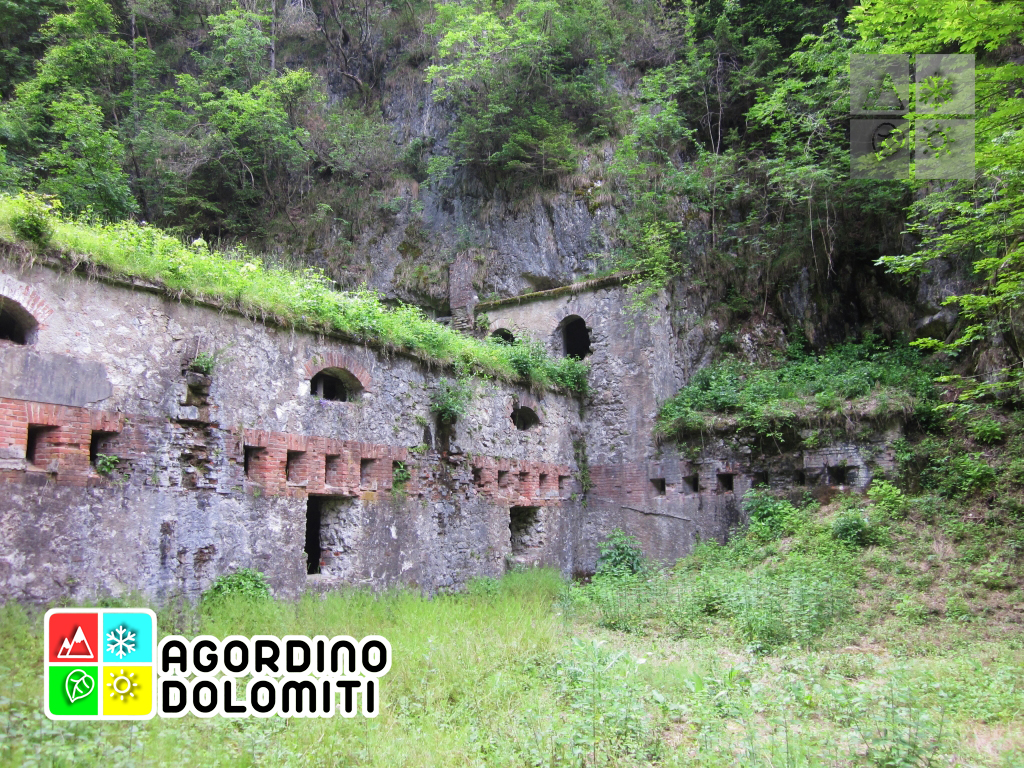 Rural activities and culture is still testified by the presence of many original “calchere”, that is the ancient lime kilns. Guests of Rivamonte Agordino can visit one, perfectly restored very recently, in Forcella Franche, not far from the picnic area and the Umberto Bedont Center. 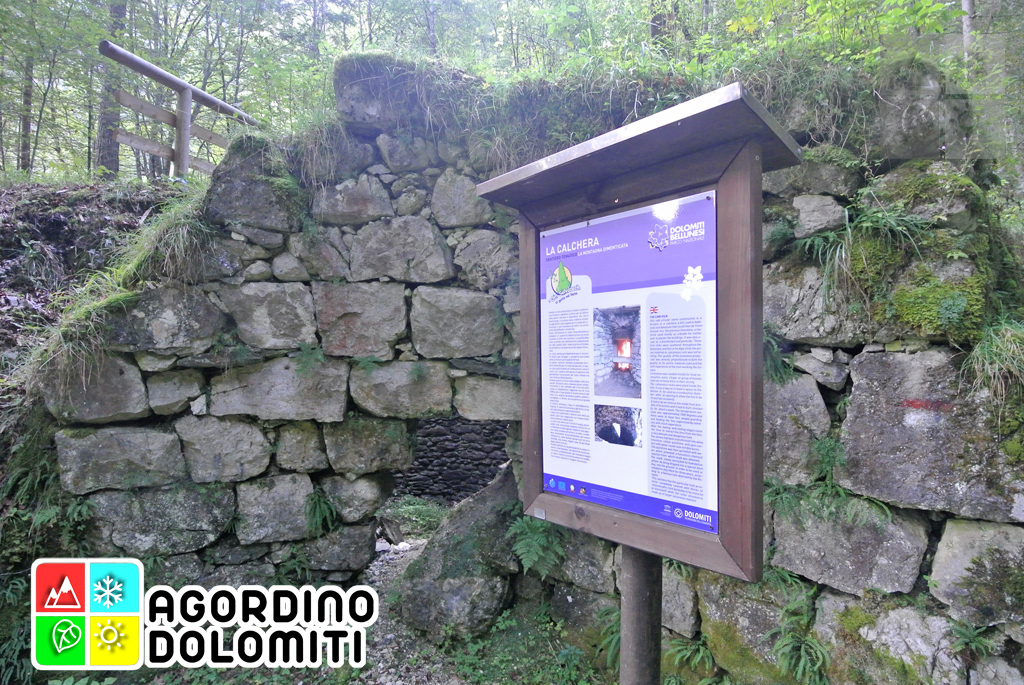 Rivamonte Agordino was one of the places of the Province of Belluno that were hit harder by the massive 1966 flood; many of the original hamlet of the Municipality have remained uninhabited since then, and the flood marked the definitive closing of the Val Imperina Mining Center. Nowadays, most of the inhabitants of Rivamonte Agordino work in the eyewear industry, which is very strong in the Conca Agordina.

Despite this, in recent times, tourism is living another golden age, thanks to a wonderful group of volunteers and thanks to associations, groups and tour operators working in the Conca Agordina. Rivamonte Agordino has currently just a few hotel beds and a brunch of flats, but the pristine charm of its landscape, its richness in peaks and activities and of its history are factors that ensure a constant touristic flow. We’re not talking about the same numbers as the Municipalities of the Alto Agordino, but for sure numbers that show a certain tendency which the Rivamonte people are striving to enhance and stimulate.

Among the most important yearly events there’s Riva Nadal – I Mercatini dei Canop; on the occasion of this event, which takes place usually on the Sunday before Christmas, the charming town center of Rivamonte Agordino becomes the house of more than 100 exhibitors of Christmas goods, both on the alleys as well as inside the centuries-old barns and houses of the village. Music, entertainment and local gastronomy further enrich this marvelous Christmas event; if you’re around, don’t forget to pass by and get a glass of Christmas mulled wine! 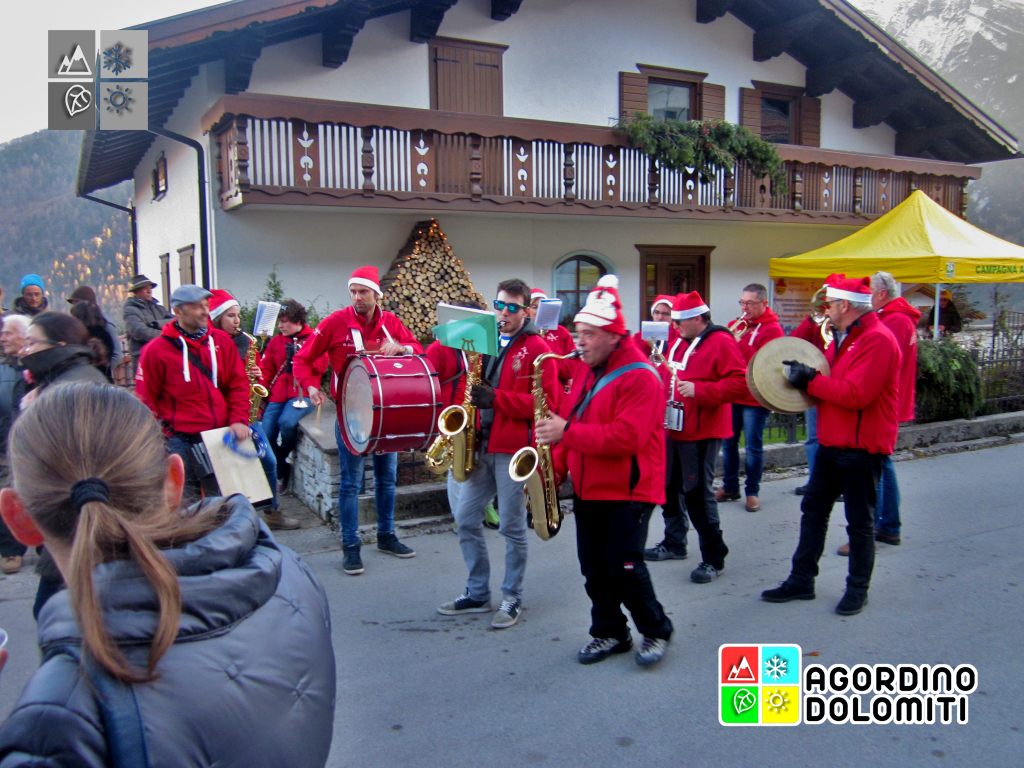 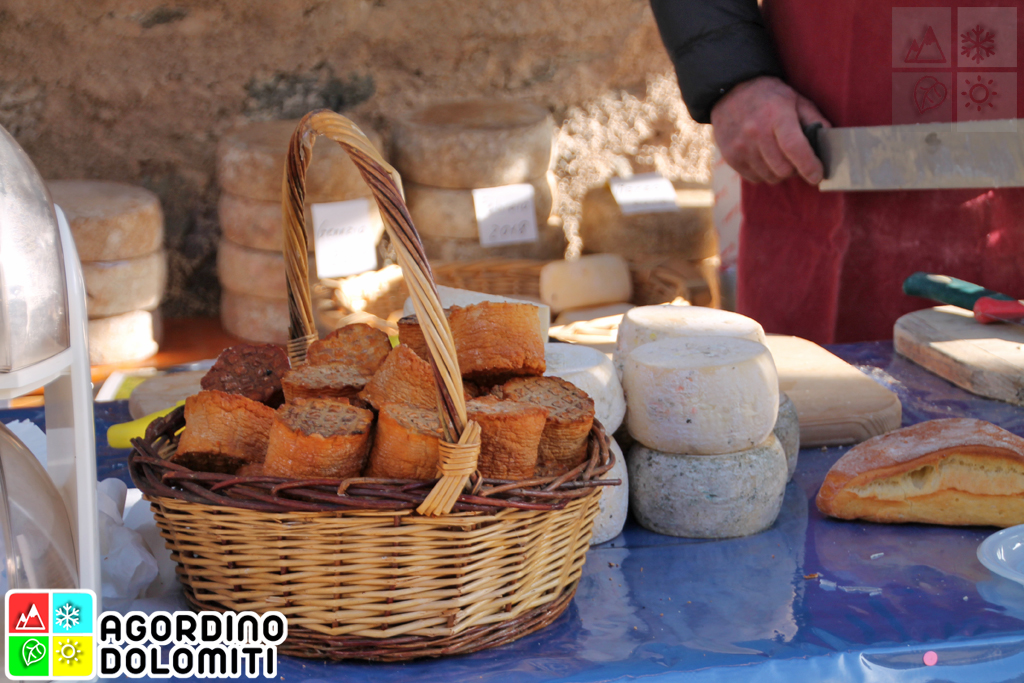 Another marvelous traditional event is Olt da Riva, the typical Carnival festival of Rivamonte Agordino. Inspired by the original wooden masks by Crispino Selle, the tradition of the Olt da Riva goes back to the 1940s and has been associated with Carnival in recent times. During the Carnival week, guests have the occasion to see many wonderful wooden masks, take part in the festival and the Carnival parade, and taste some traditional Carnival sweets. 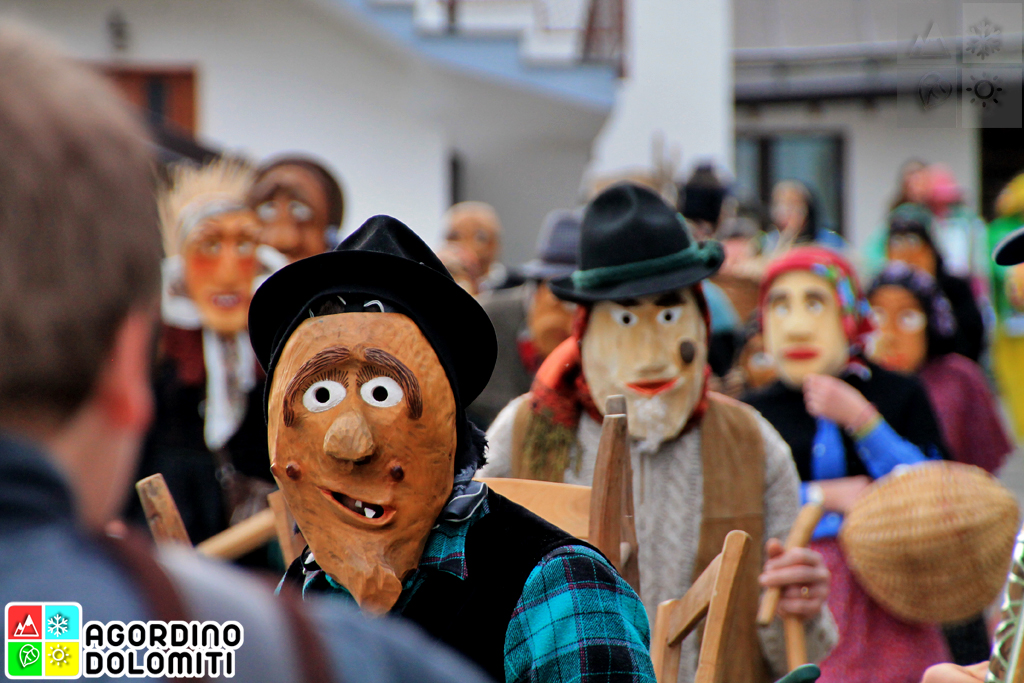 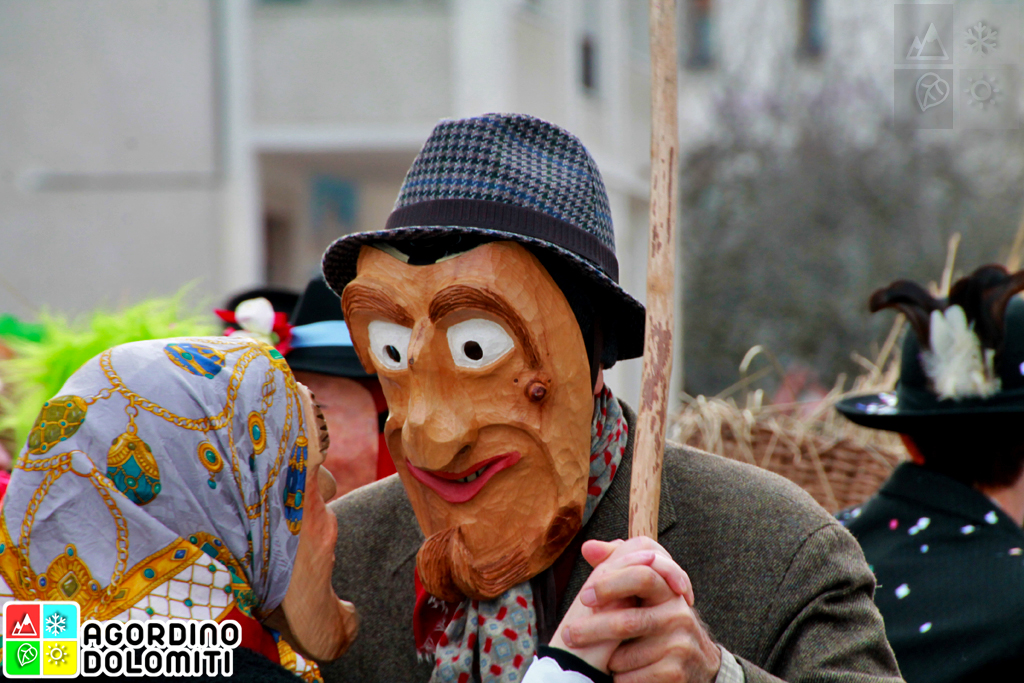 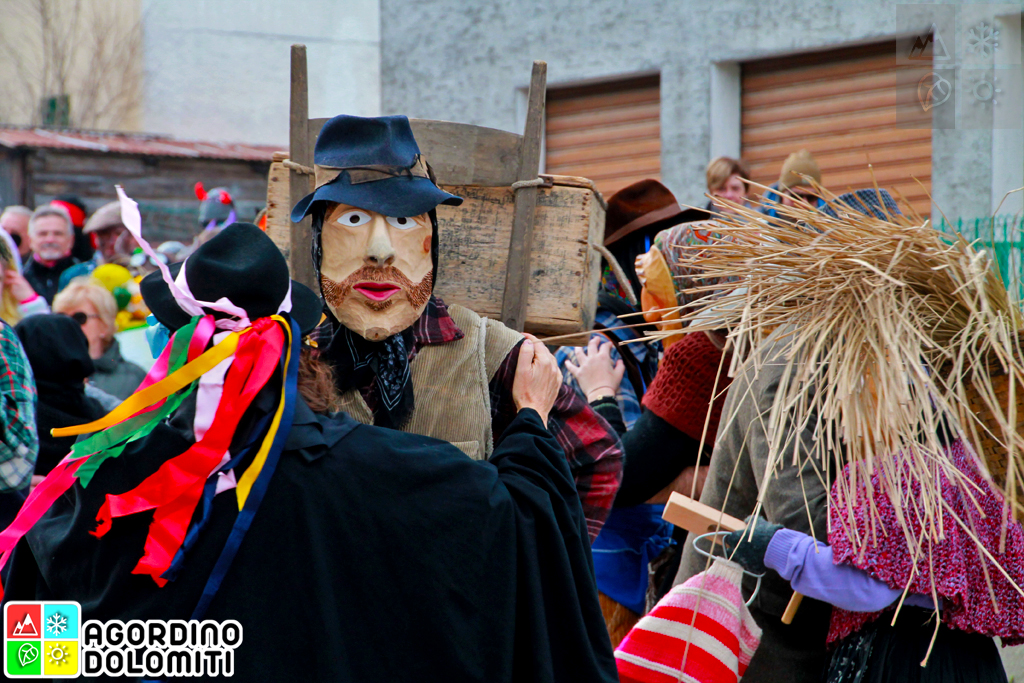 Go to: Resorts of the Agordino