A dive into the Ladinia

Livinallongo del Col di Lana is maybe the most famous tourist resort of the Agordino area and of one of the most popular ones of the the Dolomites UNESCO World Natural Heritage Site above all for its hamlet Arabba, part of the Sella Ronda ski tour (also called “the Four Passess Ski Tour”). Arabba is the jewel in the crown of winter tourism in the Agordino area with its skiing offer of primary importance; Livinallongo del Col di Lana is located in the enchanting setting of the 5th of the 9 official systems of the Dolomites UNESCO World Natural Heritage Site, that is the one of the Northern Dolomites (5th of the 9 official Dolomiti UNESCO Systems).

As for the purely historical and cultural aspect, Livinallongo del Col di Lana, together with the neighboring Municipality of Colle Santa Lucia, is the only village of the Agordino that can boast the name of Ladin Municipality: Livinallongo was indeed part of the Tyrol until 1923, when it was known with the German name of Buchenstein. The ancient relation with Austria is evident in the local dialect (the Fodom dialect), in the local architecture and in many aspects of its everyday life,  as well as in a certain collaboration with the contiguous Corvara in Val Badia. The Ladin essence of Livinallongo is protected and promoted by the Museum of Costumes, History and Traditions of the Ladin People located in the municipal seat of Pieve di Livinallongo (more information and reservations at the telephone numbers +39 04367193 and +39 338 4306071). Arabba offers the most challenging black slope of the Dolomites (black is the most difficult degree of a ski slope), that is the “Fodoma”. Livinallongo offers a nice picnic area located at the playground in the hamlet of Arabba.

During the Great War 1914-18, Livinallongo del Col di Lana was located right on the so-called “Yellow Line“, that is the military frontline between the Reign of Italy and the Austrian-Hungarian Empire; the village was completely destroyed during the war, and the Col di Lana, the hill that dominates the hamlet of Pieve di Livinallongo (also known as “the Mount of Blood”), is the emblem of World War I in the Dolomites.

In the hamlet of Castello, guests can admire the ruins of the ancient Andraz Castle, a tyrolean manor of a great importance for the control of the communication routes between the Tyrol and the Republic of Venice; the Andraz Castle has an extraordinary thousand-year old history that tells the story of the struggle for power between the bishopric of Brixen, the Neustift Convent, the Avoscano Family and the Republic of Venice. The Andraz Castle housed also the well-known philosopher and theologian Nicholas of Cusa. The Castle of Andraz can be visited both individually and with the interesting guided visits available on site; the building features also a recently restored Museum. More information and reservations at the telephone number: +39 334 3346680. 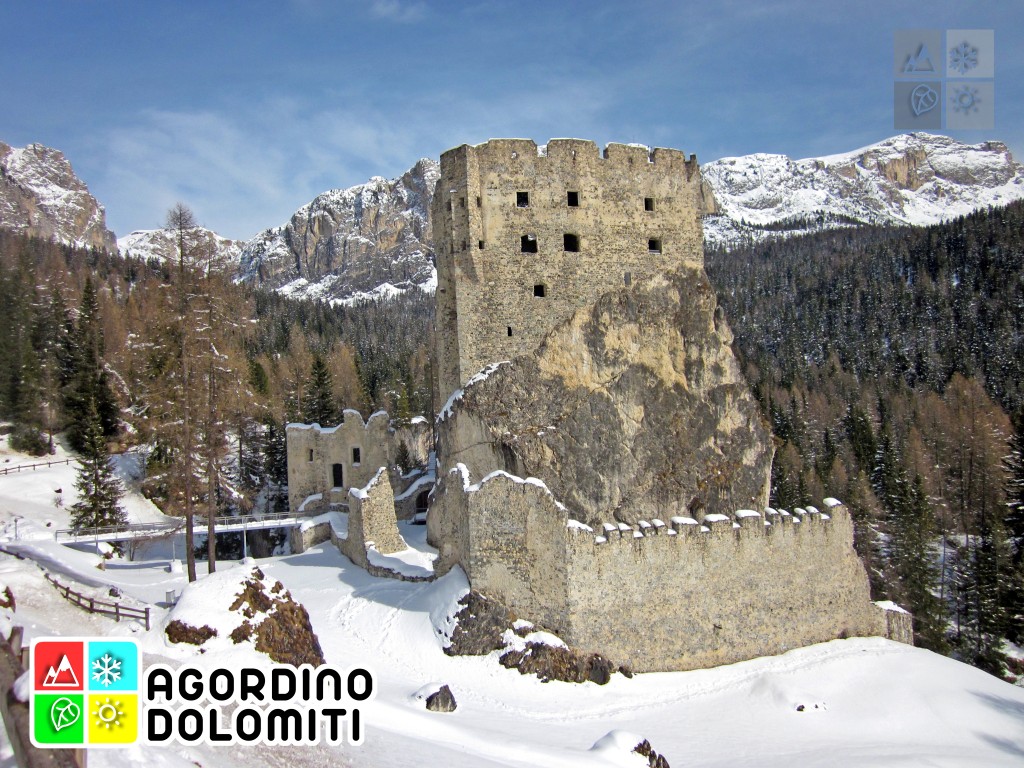 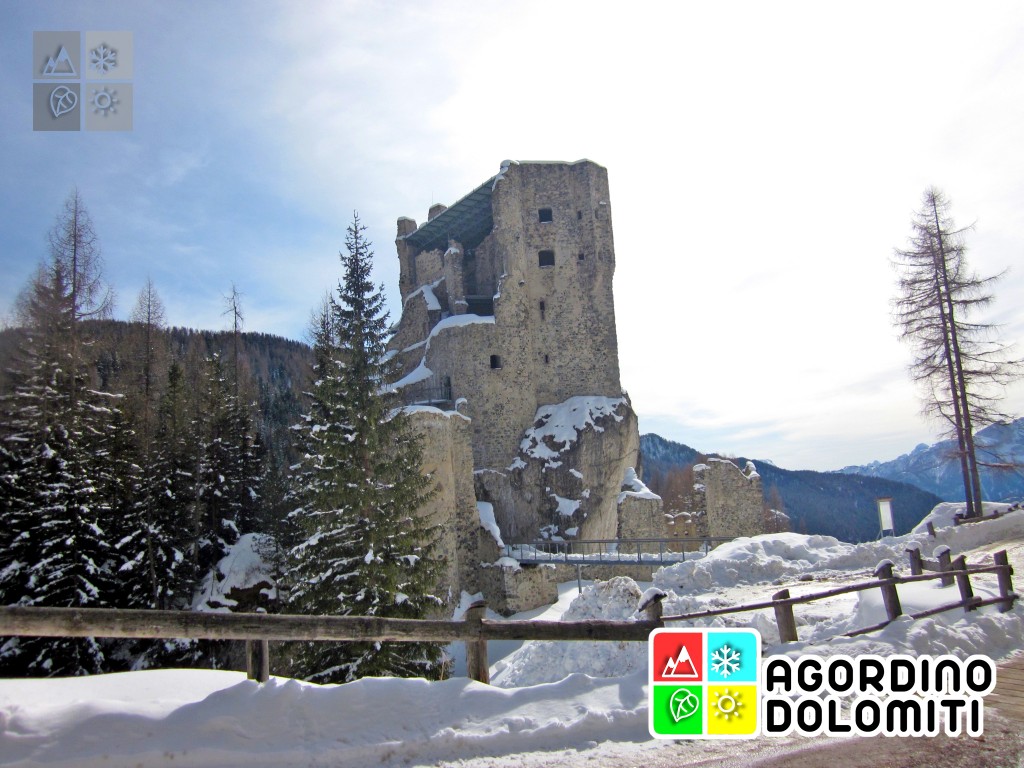 In the small municipal seat of Livinallongo, Pieve di Livinallongo, guests can admire the ancient statue dedicated to the local heroine Katharina Lanz: according to her story, halfway between history and legacy, Katharina was the tyrolean farmer that, at the age of 20, was the first person to lash out at the French troops during the Napoleonic occupation of Europe, unleashing a huge popular uprising. Katharina is still a popular character for the inhabitants of the Fodom Valley, and her statue is so important for them that, on the occasion of the first military aggression of Livinallongo by the Italian troops in 1915, it was hastily moved by hand to the neighboring Corvara.

In Arabba, guests can visit the marvellous old mill, an ancient wooden mill still perfectly working; the mill is open to visitors during the tourist seasons and it is definitely worth a visit.

For the inhabitants of Livinallongo del Col di Lana, to preserve their Ladin tradition is a fact of primary importance; with this purpose two different associations have been created: the Fodom Folk Group and the Schützenkompanie Buchenstein. Both associations offers public demonstrations on the occasion of particular events and celebrations.

The proximity of some of the most famous mountain passes of the Dolomites, that is Passo Campolongo and Passo Pordoi, ensure to Arabba a constant extraordinary influx of tourists, expecially during the summer season: motorbikers and road cyclists come to Arabba from the neighboring valleys Val di Fassa and Val Badia.

Arabba [called ‘Reba’ in the Fodom Ladin dialect] is an hamlet of the Municipality of Livinallongo del Col di Lana located at the remarkable altitude of 1901 metres above sea level at the foot of the beautiful Sella Massif; Arabba is connected to the Trentino through Passo Pordoi and to the Südtirol through Passo Campolongo. The hamlet of Arabba hosts the majority of the accommodation facilities of the Municipality of Livinallongo and it is known worldwide for being one of the four villages of the Sella Ronda, (‘Sellaronda’ in Italian) together with Val Badia, Val Gardena and Val di Fassa.

The history of Arabba is lost in the mists of time, and the only clues about it emerge from the study of the place names of the area: “Reba” seems to be related with “Roiba” or “Reiba”, that is “avalanche” or “landslide”, perhaps to emphasize a catastrophic event of the past or simply the tendency of the area to be subjected to this type of events. Although certainly used for agricultural purposes in the past, Arabba gained a key role in the economy of the village only from the 60s, thus when people began to invest in the hotels and ski lifts.

As well as being part of the Sellaronda, Arabba in part of the Arabba – Marmolada ski area, the 6th area of the Dolomiti Superski.