MTB TOUR | TOUR OF THE HAMLETS OF THE VAL BIOIS

MTB Tour | The Tour of the Hamlets of the Biois Valley

Spring in the Dolomites UNESCO World Natural Heritage Site has come, bringing days which are finally longer and mild: now it’s time to wipe off the dust from your bike and to begin another thrilling downhill season in the Dolomites! Unfortunately, snow hasn’t abandoned the paths and mule tracks located at high altitude on the Dolomites yet and most of them are therefore still impassable. Despite this minor inconvenience, in the Heart of the Dolomites, that is the Agordino, the MTB enthusiasts can fall back on the suggestive paths located at an average altitude and devote themselves to the exploration of the slopes of the valleys of the Agordino. 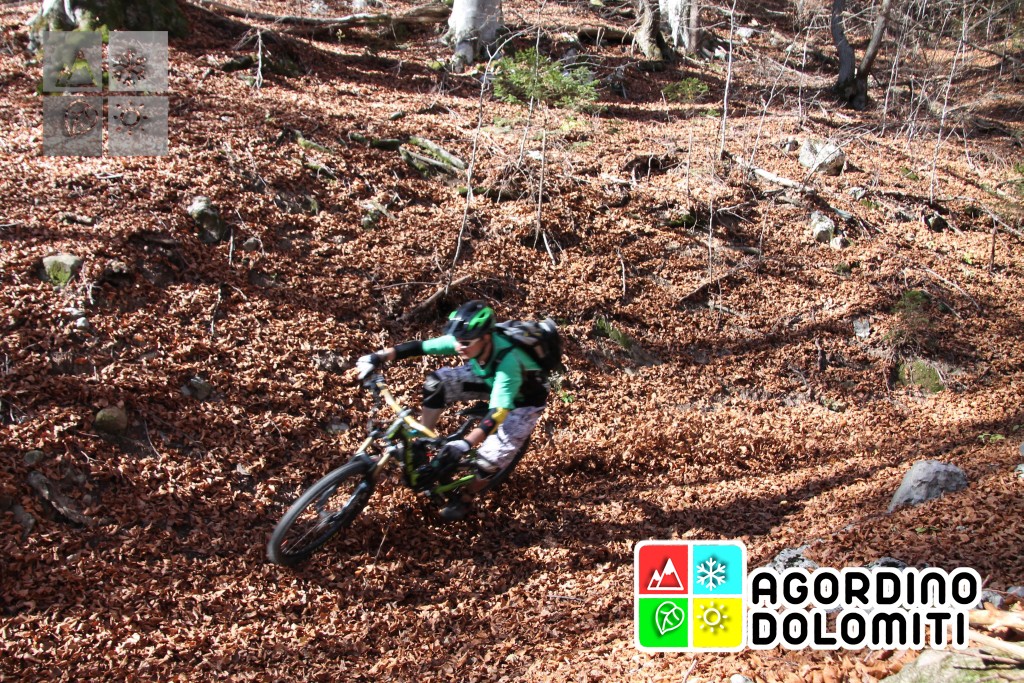 The Tour of the Hamlets of the Biois Valley (Val Biois) can be considered a cross-country tour with enduro influencies of an average level of difficulty; the whole itinerary can be made easily in 3-4 hours and it is definitely suggested in order to stretch the legs after the past long winter; the Dolomites Heart team, the lord of the fat wheels in the Dolomites UNESCO World Natural Heritage Site, has taken us around to discover this beautiful MTB tour in the High Agordino.

In this version of the Tour of the Hamlets of the Val Biois, we decided to start out from Canale d’Agordo but, due to the circular conformation of this route, this tour can be made starting out from almost every place in the valley floor. From the mail square of Canale d’Agordo, Piazza Papa Luciani, we took the “Cavallera” bicycle path towards Falcade, admiring from time to time the beautiful and artistic Stations of the Cross made recently by the local artist Franco Murer, son of Augusto. 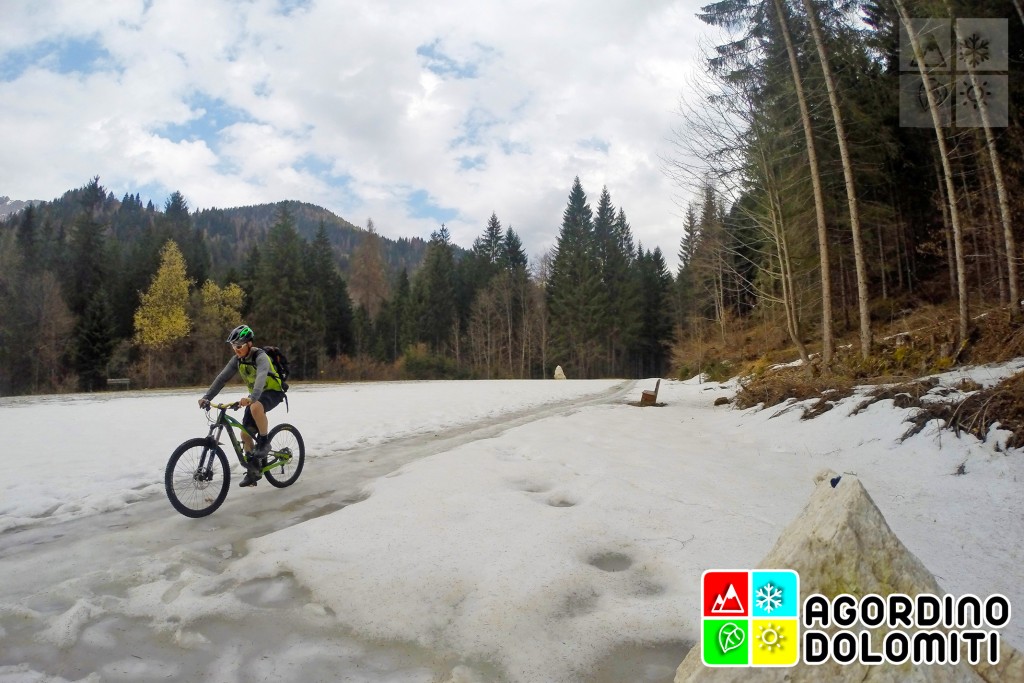 The ascent is of an average level with some spurts on steeper sections that force bikers to push harder on the pedals, but all in all it is quite enjoyable. Arrived at the hamlet of Caviola (Municipality of Falcade), we crossed the bridge on the Rio Gavon stream and we continued on the cycle track towards Falcade; approaching Falcade, we took the track close to the stream and we reached in five minutes the wonderful Piana di Falcade right in the center of the village. At the end of thc cycle track, right in front of the municipal bowling ground, we crossed the bridge on the left and we continued along the bank of the river for almost 300 meters; then we crossed another wooden bridge and we reached the road that leads to the hamlet of Molino, the access to the Alpe Lusia – San Pellegrino ski area for Falcade. Near the “Al Dollaro” Hotel we turned right, crossed the hamlet of Molino, than back on the State Road towards Passo San Pellegrino.

After a couple of hairpin turns we reached Falcade Alto, a beautiful histioric hamlet of Falcade with its fascinating small square, the wonderful church of Saints Fabiano and Sebastiano, many amazing tabià (barns). After the bottleneck in the center of the hamlet, we continued to follow the main road for almost 300 meters, then we took the road on the right that leads to the hamlet of Somor. The ascent became very steep, but after 10 minutes we reached Somor. 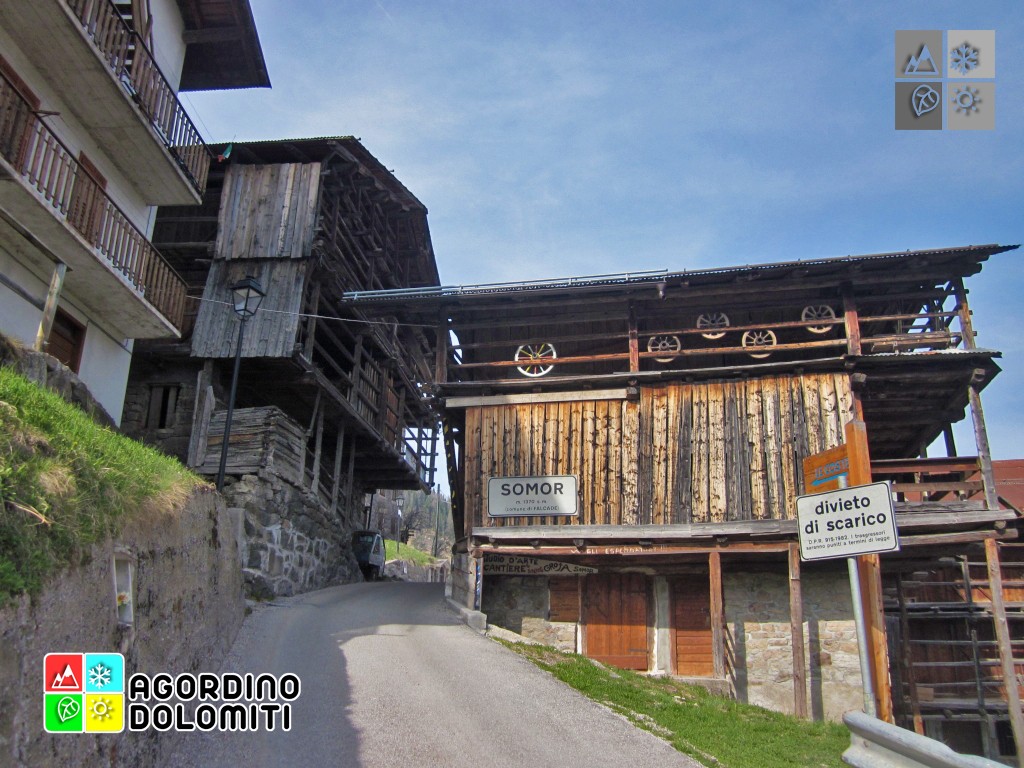 From the small square of the hamlet, we continued straight on and we took the “Le Coste” path (click here to view our article on the “Le Coste” walk in Falcade). The “Le Coste” path is easy, wide and not too steep, but very enjoyable anyway; after 5 minutes of pure downhill and after the final descent we met the road to the hamlet of Valt but, instead of pedaling uphill we turned downstream for a few meters until we found a small road on the left that led us to a bridge green railings and then to the hamlet of Marmolada. We continued on the main road towards the hamlet of Sappade; on the top of the hill we turned downstream on the asphalt road without reaching Sappade.

After a long left curve we took a path on the right side of the road (it is a bit difficult to see, so take your time and find it out beacuse it is worth it); this path is steep and allows bikers to ride really fast. The path ends nearby the church of the Madonna della Salute in Caviola, a building included in the list of the National Monuments by the Fine Arts Academy of Venice. 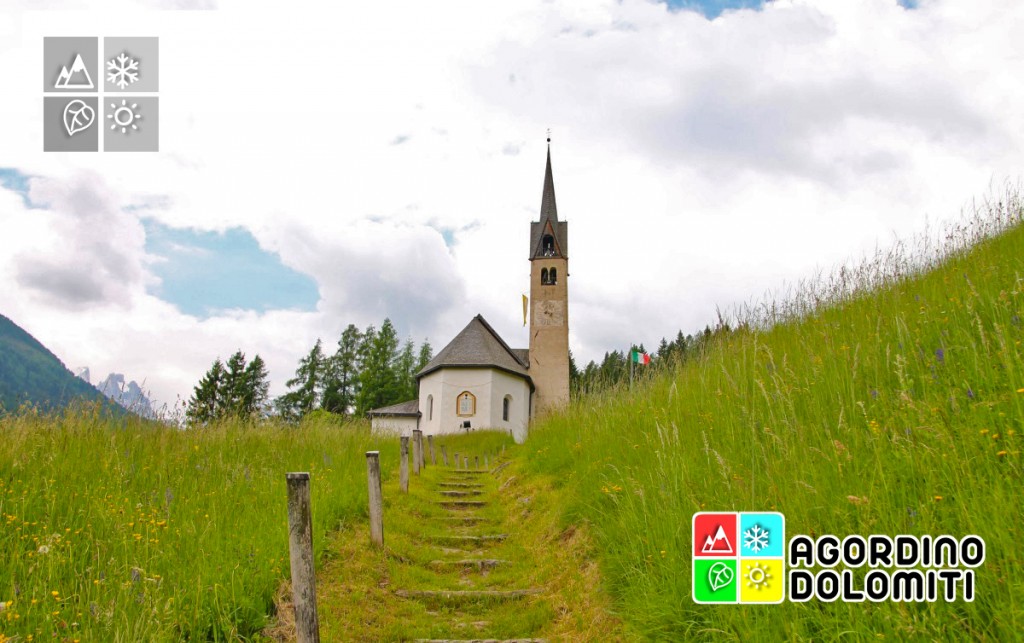 At the crossroad we rode towards the center of the hamlet of Caviola and we turned left at the Bar Coop following the signs for Pisoliva; the ascent became very challenging but, after a couple of hairpin turns, we reached the fascinating and panoramic hamlet of Feder. 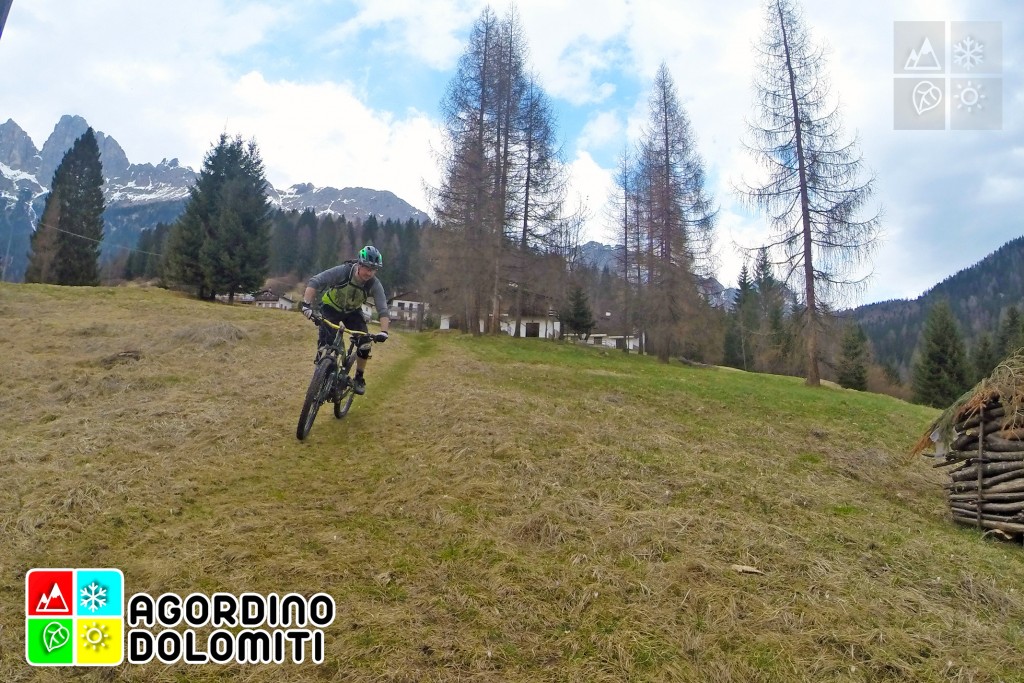 We reached the first houses of the hamlet and then we took a path on the left that leads to Caviola; along the path we found ourselves on a lawn with a crossroads and a bench in the middle: we took the left path at the crossroads. The rest of the track is fast and very challenging, definitely not to be underestimated: pure enjoyment for downhill lovers. 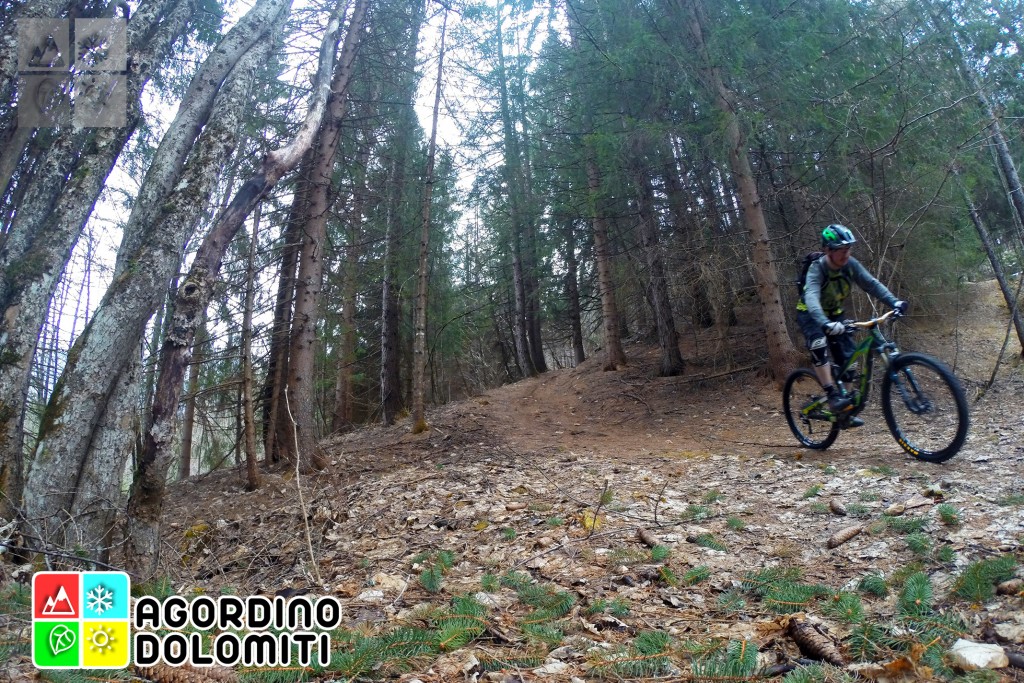 Back in Caviola we turned left on a small bridge and we found ourselves on the same road we took to reach Feder, that now we had to ride in the opposite direction. We followed the road until it meets the State Road nearby Hotel Felice; we took the main road downstream and then the narrow road on the left towards the hamlet of Carfon. After 10 minutes we reached this hamlet of the Municipality of Canale d’Agordo, we followed the asphalt road until it tuned into a mule track; riding on the mule track was really pleasant: it has some sharp bends but it is definitely easy and enjoyable. The mule track ends right in front of the State Road towards Falcade; we just crossed it to reach Canale d’Agordo, the starting point of our tour. 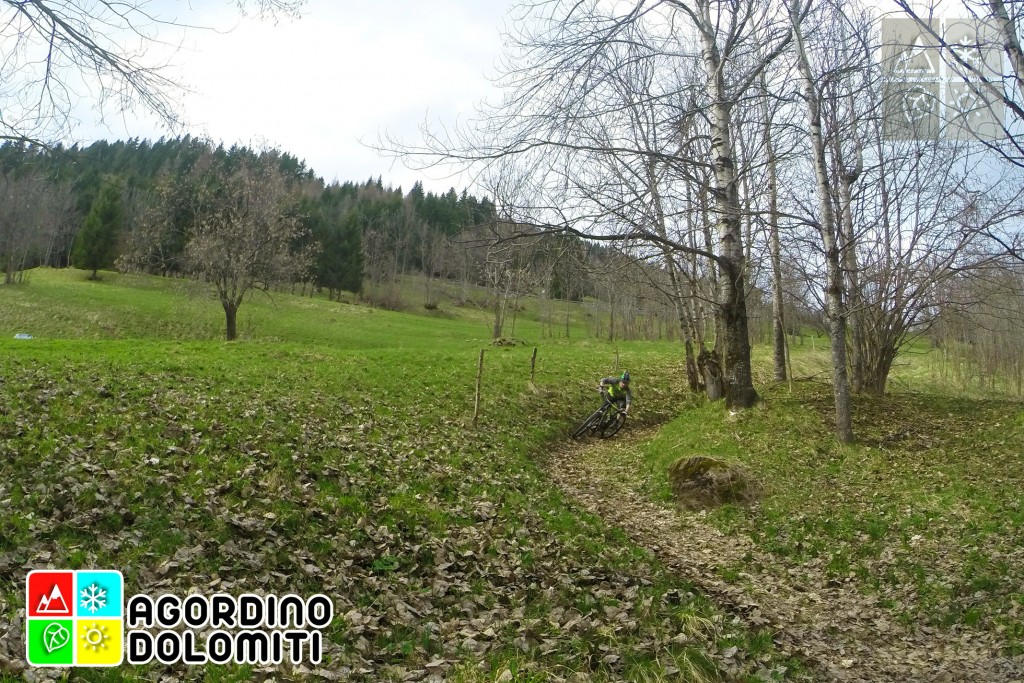 So, if you’re looking for a nice, quite easy and enjoyable MTB tour in the Dolomites UNESCO World Natural Heritage Site, the Tour of the Hamlets of the Biois Valley is definiely something which is right for you: you can get more information about it by contacting the local Tourist Offices (you find contacts here below), or you can contact Dolomites Heart by clicking on the banner here below to discover this tour and hundreds of other extraordinary tour proposals in the Dolomites with our professional National MTB Instructors – See you in the heart of the Dolomites!

Did you enjoyed this article? Let us know what you think by leaving a comment!